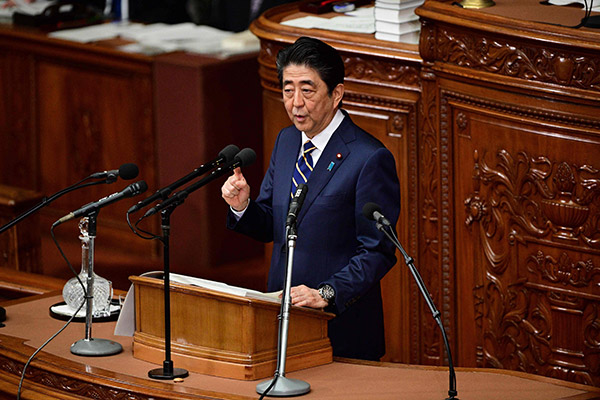 Japanese Prime Minister Shinzo Abe says he wants to normalize diplomatic relations with North Korea. He made the remarks in an annual policy speech to the Japanese Diet on Monday, January 28. Abe’s remarks towards building a better relationship with North Korea come amid rising tensions between South Korea and Japan following a low-altitude flight by a Japanese patrol plane, a military radar dispute and unsettled historical issues. With more, here’s Shin Beom-chul, senior director of the research division at the Asan Institute for Policy Studies.

Abe’s speech outlines his country’s basic position that Japan will work to improve ties with North Korea so as to ensure that it is included in denuclearization talks between North Korea and the U.S. Japan is also clearly committed to resolving the issue of abductions of Japanese citizens carried out by North Korea some decades ago. In last year’s annual speech, Abe focused on North Korea’s nuclear and missile provocations following Pyongyang’s nuclear test and missile launches in 2017. Now, with North Korea-U.S. negotiations underway, the speech revolved around themes of diplomatic participation and resolving the abduction issue.

In his policy speech last year, Abe said that North Korea’s nuclear and missile development was a grave and impending threat and stressed that his country would not yield to any provocation. In a stark contrast to last year’s message, he said in this year’s speech that Japan and North Korea need to break the shell of mutual distrust to resolve the issue of the North’s nuclear and missile programs and the kidnapping of Japanese nationals by the North.

Abe’s speech also shows that Japan is concerned about the possibility of being sidelined from the nuclear talks.

North Korea and the U.S. have held denuclearization talks, with South Korea mediating between the two, while there is a vague agreement that China will also take part in future negotiations over a peace regime on the Korean Peninsula. Japan is also eager to play some part in the process. But Japan doesn’t need to worry too much about the possibility that it might be left out in North Korea-related issues. In the course of denuclearization negotiations, countries involved will enter a stage of discussing economic assistance for the North. North Korea may ask for at least 10 billion US dollars from Japan, in the form of compensation for the Japanese colonial period. Tokyo in turn may link this matter with the abduction issue. Japan frets about being passed over, but it is at less risk of this than is believed.

At present, I think Japan’s domestic political situation is influenced more greatly by South Korea-Japan relations than by North Korea-Japan ties. Japan is discontent with South Korea’s Supreme Court’s rulings against Japanese firms for their role in forced labor during World War II as well as the Seoul government’s attitude toward the rulings. Many in Japan believe the court decisions violate a 1965 Korea-Japan Normalization Treaty that, for Tokyo at least, settled all issues stemming from the Japanese colonization of Korea. Worsening bilateral ties further is the recent dispute between Seoul and Tokyo over a Japanese patrol plane’s low-altitude fly-by of a South Korean ship.

I think the Abe government is channeling friction with South Korea into boosting political support internally and as a way to apply pressure against Seoul externally.

During his 50-minute speech in front of the Diet, Abe mentioned South Korea only once when explaining his North Korea policy and no mention was made about the Seoul-Tokyo relationship. This a stark difference to speeches made in the recent past by Abe, where he referred to South Korea as “the most important neighbor sharing strategic interests.”

Last year, he left out that characterization of the Seoul-Tokyo relationship, likely out of frustration with the Moon Jae-in government’s decision to scrap a controversial agreement with Japan over victims of its wartime sexual slavery.

By using this and other disagreements with Seoul, analysts believe Abe is seeking to consolidate support among his party and supporters in order to elevate Tokyo’s diplomatic negotiating position vis-à-vis the North Korea nuclear issue.

However, normalizing relations with North Korea is a challenging proposition.

There was a time, in the 1990s, when Japan was North Korea’s largest trade partner. But as Japan threw its support behind international sanctions on the North, bilateral ties deteriorated significantly. Japan has been quite firm on its position of what denuclearization of North Korea would look live, given its close proximity to the country and the assumption that North Korea’s nuclear weapons and missiles pose a direct threat to Japan.

For North Korea, dialogue with the U.S. is most important right now. It will then focus on relations with South Korea and China. If and when the North makes some progress in relations with these countries, it will consider greater engagement with Japan.

With Pyongyang’s diplomatic energy focused elsewhere, along with continued Japanese pressure to comply with international sanctions and a reluctance to confront past wrongdoings in a way acceptable to North Korea, Japan may struggle to pursue the kind of relationship with North Korea that Abe describes in his speech.

If denuclearization talks between the North and the U.S. move forward somehow, Pyongyang could improve its economic conditions as well as its ties with the U.S. and Japan. But the Kim Jong-un regime should first choose to make progress towards denuclearization.

At this point in time, dialogue with the U.S. is the top priority for North Korea. Tokyo and Pyongyang may or may not close the distance between them at a later time, depending on the result of denuclearization negotiations and diplomatic developments on and around the Korean Peninsula.