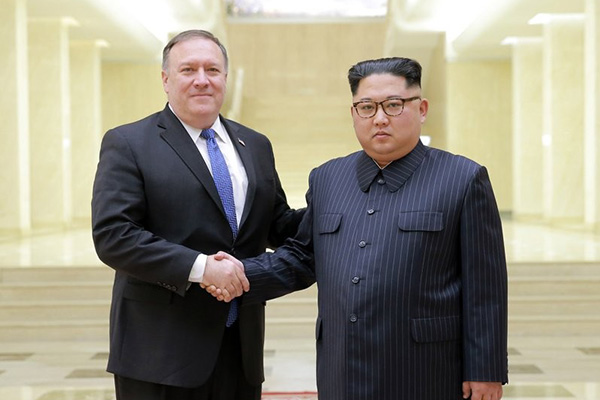 The denuclearization negotiations between North Korea and the United States seem to be back on track. The U.S. State Department said on Tuesday that Secretary of State Mike Pompeo will travel to North Korea on Sunday, October 7 to meet North Korean leader Kim Jong-un. Attention is focused on the outcome of Pompeo’s upcoming Pyongyang visit, the fourth of its kind in just three months. Here’s Professor Kim Yong-hyun from the North Korean Studies Department at Dongguk University.

Pompeo’s North Korea visit itself is greatly significant as many expect it to break the deadlock in denuclearization talks between the North and the U.S. Also importantly, the visit could set up a second summit between the two nations’ leaders. It’s difficult to argue that Pompeo’s third visit to Pyongyang in July produced any meaningful results. But this fourth visit brings new urgency for America’s top diplomat, as illustrated by the institutional support he’s receiving. It will be an important visit that seeks new avenues of progress in North Korea-U.S. relations

Pompeo’s fourth North Korea visit was initially planned for late August before U.S. President Donald Trump suddenly cancelled it, citing a lack of progress in North Korea’s denuclearization. Pyongyang-DC relations have since been in a stalemate. Considering the background, Pompeo’s Pyongyang visit itself shows some progress in their relations. It is assumed that the inter-Korean summit in Pyongyang last month played some role in getting U.S-North Korea talks back on track.

At the South-North summit in Pyongyang in September, the divided Koreas signed a new military agreement, and Kim Jong-un talked of his strong commitment to denuclearization of the Korean peninsula. I believe this has contributed greatly to creating a positive diplomatic atmosphere between the North and the U.S.  I’d say that North Korea and the U.S. have found some common ground for dialogue, based on what came out of the Pyongyang summit.

The U.S. continues to insist that North Korea reveal a specific schedule or timetable and take necessary measures to denuclearize before anything else happens, while North Korea demands a formal declaration ending the Korean War before seriously discussing the nuclear issue. The two sides have thus far failed to reach an agreement, but South Korean President Moon Jae-in seems to have coordinated their views as a mediator, helping facilitate Pompeo’s Pyongyang visit earlier than expected.

Apparently, the third summit between Moon and Kim was a driving force behind Pompeo’s fourth North Korea visit. As if on cue, the U.S. Secretary of State accepted the North Korean leader’s invitation to visit Pyongyang during his meeting with North Korean Foreign Minister Ri Yong-ho in New York on September 26, two days after a meeting between President Moon and Trump. In addition to South Korean mediation, analysts speculate that North Korea and the U.S. must have engaged in behind-the-scenes negotiations for some time, ultimately leading to a rescheduled Pompeo visit.

In the meantime, North Korea said on Tuesday that it will not particularly hope for an end-of-war declaration if the U.S. does not want it, adding that a war-ending declaration should not be used as a bargaining chip in denuclearization. Professor Kim explains why North Korea made these remarks.

North Korea is laying the political groundwork for drawing more concessions from the U.S. The remarks, paradoxical as it may sound, imply that the U.S. must give the North a gift, namely, the end-of-war declaration. What North Korea is trying to say is that it will be difficult for the North to move on to the next step unless the U.S. puts an end to the status of war on the Korean Peninsula. In other words, Pyongyang is using this issue as a means of pressuring the U.S.

It seems North Korea is prodding the U.S. ahead of Pompeo’s visit to Pyongyang. Now, attention turns to whether the Kim-Pompeo meeting will lead to a second summit between Kim and Trump, and how specifically the two countries will discuss denuclearization measures and the end-of-war issue. The denuclearization measures here refer to the dismantlement and inspections of North Korea’s nuclear facilities—measures that have been officially discussed following the September inter-Korean summit.

The key is how North Korea and the U.S. will reach a compromise on denuclearization and the end-of-war declaration issues. The important point we could focus on is whether North Korea can meet Washington’s demand to some extent and what answer Pompeo will give to the North in regards to the ending the Korean War. Another focus in point is whether the two sides will finalize a second North Korea-U.S. summit during Pompeo’s prospective visit to Pyongyang.

Many analysts, including me, had imagined that North Korea and the U.S. would make significant progress in finding a compromise on those issues if Pompeo visits the North in early October. Now that Pompeo’s schedule for his fourth Pyongyang visit has been confirmed, discussions about denuclearization and the end-of-war issue will likely move forward. I think the meeting between Kim and Pompeo has been decided, on the assumption that some positive results will be produced during the discussions.

North Korea and the U.S. have been at odds so far, with the former demanding a declaration of an end to the war and the easing of sanctions, while the latter arguing that the North should take practical denuclearization measures first.

But the U.S. State Department says that denuclearization talks are going in the right direction. The U.S. even disclosed an outline of the upcoming meeting between Pompeo and Kim—something they didn’t do before the Secretary of State’s previous visits to North Korea. This suggests that the two countries are close to some form of an agreement regarding denuclearization and corresponding measures. And if a time and venue for a second North Korea-U.S. summit is finalized, it will be a major step towards the establishment of a peace regime on a nuclear-free Korean Peninsula.

After Pompeo’s North Korea visit this weekend, the most important thing to watch is whether a second North Korea-U.S. summit will become a reality. For the Trump Administration, it would be ideal to stage a second summit between Trump and Kim before the midterm elections on November 6.

If the two sides manage to agree on denuclearization and the end-of-war declaration issue in the process, they may also be able to agree on a peace regime on the peninsula as well. In this respect, the second North Korea-U.S. summit will be highly crucial.

U.S. Special Representative for North Korea Stephen Biegun will travel with Pompeo to Pyongyang. Korea watchers will look to see whether North Korea and the U.S. will be able to strike a tangible deal on what the U.S. wants, namely, denuclearization and what North Korea wants, that is, an end-of-war declaration, during the Kim-Pompeo meeting this Sunday.