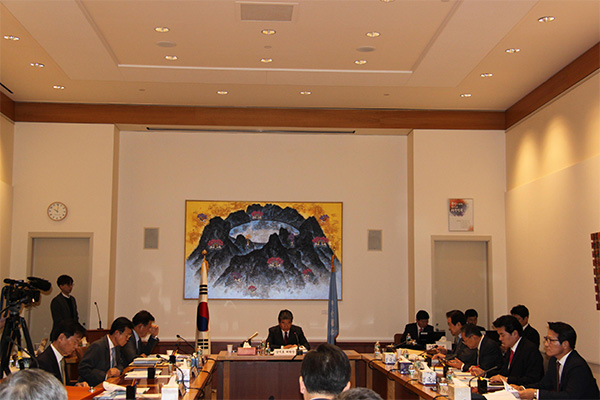 While the U.S. continues to pressure North Korea, South and North Korea have agreed to break ground on construction to connect cross-border railways and roads within the year. In the meantime, South Korean President Moon Jae-in, now in Europe on a nine-day tour, has asked French President Emmanuel Macron to ease sanctions on North Korea on the assumption that the North takes practical denuclearization measures. Many are paying attention to the possible repercussions of Moon’s lobbying. Here is Chung Young-tae, director of the Institute of North Korea Studies, to discuss a series of recent news of sanctions on North Korea.

Seoul and Pyongyang have agreed to hold the groundbreaking ceremony within the year, possibly in late November, to start connection of railways and roads along the eastern and western regions on the peninsula. In the process of conducting field studies on linking railways across the peninsula, South Korea may have to bring industrial equipment or steel to the North. But U.N Security Council sanctions restrict supplies of industrial machinery, steel and oil to North Korea.

During their first high-level talks since the Pyongyang inter-Korean summit in September, South and North Korea agreed on Monday to push ahead with a ground-breaking ceremony to re-link severed railway and roads in late November or early December. Following the agreement, discussions of inter-Korean economic cooperation continue to gain momentum.

The question is whether the agreement will actually lead to a physical connection of cross-border railways and roads. For this project, it is necessary for South Korea to provide the North with a large amount of construction materials, heavy equipment and oil as well considerable financial aid. With North Korea subject to international sanctions, however, it is virtually impossible to bring supplies and equipment to North Korea. Moreover, South Korea also needs to consider the position of the U.S., which continues to pressure the North over denuclearization.

The inter-Korean railway project may make the U.S. feel uncomfortable for two reasons. First, South Korea’s provision of steel and machinery to the North, under the pretext of railway connection, might undermine international sanctions on North Korea.

Second, the U.S. has held direct talks with the North while still maintaining sanctions as a form of leverage. But if Seoul presses ahead with dialogue with Pyongyang or advances bilateral relations too fast without considering Washington’s position, sanctions may become less effective. The U.S. is concerned about these possibilities.

The U.S. is sensitive to South Korea’s desire to carry out economic exchanges with the North, reiterating its view that North Korea should denuclearize first before any sanctions are eased. At present, the U.S. bans the provision of goods and services needed for North Korea’s construction and transportation industries. That means the inter-Korean project to connect railways and roads could violate Washington’s own sanctions on the North.

The success or failure of the project will be determined by cooperation from the international community. During his ongoing European tour, President Moon has presented his vision to facilitate North Korea’s denuclearization by easing sanctions once denuclearization reaches a point of no return.

The Moon Jae-in government believes that a better inter-Korean relationship is as important as North Korea’s denuclearization and that sanctions on the North are extremely detrimental to the advancement of South-North relations. In other words, the South Korean government thinks that inter-Korean ties can move forward if and when the sanctions are eased in some way. That’s why the South Korean president is actively raising the need for Pyongyang to take sincere denuclearization measures and for the international community to ease sanctions on the North at the same time.

President Moon urged French President Emmanuel Macron to ease sanctions on North Korea during their summit talks on Monday, October 15. It is the first time that the South Korean president has requested a permanent member of the U.N. Security Council play a role in easing sanctions on the North.

It seems Moon felt the need to engage in diplomacy with France to persuade the permanent member of the U.N. Security Council to play a more active role in easing sanctions on North Korea in a way the South Korean government wants. The Moon government has advocated a peaceful approach in dealing with North Korea. Moon is using his European tour as a means of enlisting Europe’s understanding and support for the process to establish peace on the Korean Peninsula. In doing so, he seeks to create public opinion favorable to the idea that European nations should show more commitment to easing sanctions on North Korea.

When it comes to North Korea sanctions, the South Korean government has so far supported Washington’s insistence on “denuclearization first, easing sanctions later.”

Indicating a shift from that stance, however, the South Korean president has proposed easing or lifting sanctions to help speed up North Korea’s denuclearization process. He believes easing sanctions will convince North Korea that it made the right choice pursuing denuclearization and will serve as the catalyst for peace on the peninsula. However, the international community remains lukewarm about Moon’s idea.

In response to Moon’s request to ease sanctions, Macron stressed the need to maintain them until North Korea takes substantial steps toward denuclearization. I think the French president said what he had to say. As the leader of a permanent member of the U.N. Security Council, Macron should consider France-U.S. relations.

For South Korea, it is necessary to clearly show to the European countries that it has actively persuaded North Korea to take sincere measures related to denuclearization and that Seoul’s efforts have actually drawn positive responses from Pyongyang. South Korea should underline this part to appeal to the EU.

Macron reiterated the principle of CVID, which stands for complete, verifiable and irreversible denuclearization, and included this term in the joint statement adopted at the France-South Korea summit.

Despite the French president’s strong position on this issue, the presidential office in Seoul thinks that it is still significant to put the issue of easing anti-North sanctions on the agenda of international discussions. President Moon plans to make the same request to ease sanctions during his bilateral meetings with leaders from Britain and Germany on Friday on the sidelines of the Asia-Europe Meeting in Belgium.

Moon is reaching out to the international community to establish a lasting peace on the Korean Peninsula. But his efforts will bear fruit only when North Korea shows sincerity and willingness to denuclearize.