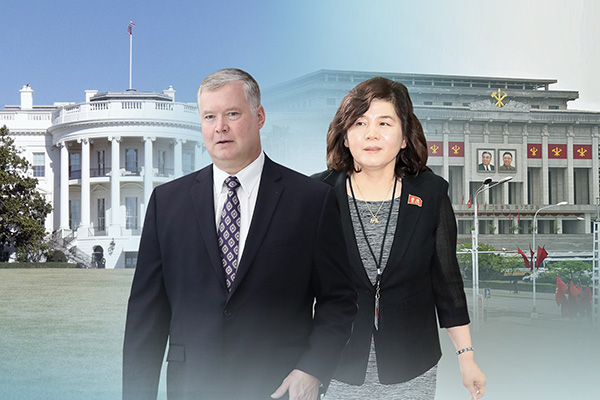 High-level talks between North Korea and the U.S. set for this week in New York have been postponed. The U.S. State Department said on Wednesday that a meeting between U.S. Secretary of State Mike Pompeo and vice chairman of the North Korean Workers’ Party Central Committee Kim Yong-chol on Thursday has been put off indefinitely. The statement came shortly after the U.S. midterm elections. Here’s Hong Hyun-ik at the Sejong Institute to discuss the delay and the possible repercussions of the surprise decision.

Actually, there was an indication of a possible delay in the talks. For the meeting scheduled for November 8, Kim Yong-chol had been expected to come to Beijing around November 6 to fly to the U.S. But the North Korean official never showed up in Beijing around that time. That’s why some suspected that the meeting might be put off.

After watching the result of the midterm elections, Trump may have thought that there was no need to hurry on the North Korean nuclear issue. North Korea, for its part, will have a summit with Russia soon, while Chinese President Xi Jinping could visit Pyongyang anytime he wants. Also, Japanese Prime Minister Shinzo Abe hopes to hold talks with North Korean leader Kim Jong-un.

North Korea or the U.S., or both, may have concluded that it would be better to wage a war of nerves in this situation, leading to the last-minute postponement of the planned talks.

Many in the U.S. remain skeptical of North Korea’s sincerity toward denuclearization. The officials, especially those in the Democratic Party, will criticize the Trump administration if the high-level talks between the North and the U.S. fail to produce any tangible result.

North Korea, meanwhile, continues to plow ahead with its diplomatic outreach to East Asia suggesting it may want to change the pace of its negotiations with the U.S.

During the North Korea-U.S. summit in Singapore on June 12, the two countries reached an agreement in principle. Although Trump and Kim signed the so-called Sentosa agreement, the U.S. has yet to respond to the proposals North Korea wants to implement, such as easing sanctions on the North and declaring a formal end to the Korean War—the first step toward establishing a peace regime. Also, North Korea’s denuclearization measures fall far short of Washington’s expectations in terms of the declaration and dismantlement of North Korea’s nuclear programs.

As a result, their denuclearization talks have made little progress since June, with both sides remaining far apart over how to address the problems. Pompeo visited North Korea in early October, but the two sides only confirmed their differences on those matters.

During their historic first summit in June, North Korea and the U.S. agreed on the denuclearization of the Korean Peninsula and the establishment of a peace regime. But negotiations have failed to generate much tangible progress since then. Thus the high-level talks originally scheduled for November 8 presented a potential opportunity to create some momentum between Washington and Pyongyang.

It is important to finalize the date and venue for a second summit between North Korea and the U.S. at the high-level talks. It is also necessary to fine-tune their widely differing views. That is, the two sides have to coordinate on how extensively North Korea will accept the U.S.’ demand for practical denuclearization measures and what corresponding actions the U.S. will take, like the end-of-war declaration or easing sanctions on North Korea.

If the two countries sign a specific and big deal over denuclearization, and if the deal is actually put into action, the peace process on the Korean Peninsula will again hit full stride.

North Korea and the U.S. were expected to discuss key issues such as the inspections of the Tongchang-ri missile engine test site and the Punggye-ri nuclear test site as well as the Yongbyon nuclear facilities. Some speculated that the high-level talks would focus on a possible second North Korea-U.S. summit.

The delay of those talks is also expected to affect regional diplomacy surrounding the Korean Peninsula.

Both North Korea and the U.S. believe that there is no need to make concessions just to hold talks and they can still afford to take time. But they refrain from going as far as to criticize each other. So we should wait for some time and see how things will unfold.

While the U.S and North Korea hit the pause button, inter-Korean reconciliation, including plans for a visit to Seoul by North Korean leader Kim Jong-un and the reconnection of cross-border railways and roads, may be halted a well. As Washington continues to ask for inter-Korean relations to progress in tandem with denuclearization, it is difficult for South Korea to accelerate inter-Korean relations unilaterally. But Mr. Hong downplays negative interpretations of the situation.

I wouldn’t say that North Korea-U.S. relations were damaged or their talks fell apart. Rather, the two countries are engaging in a tug-of-war with the purpose of gaining more concessions from the other side.

It is far better for them to take time and meet again when they are fully prepared to reach an agreement than to hurriedly meet and argue, only to make their talks a failure. In this vein, we have to wait patiently and closely watch their relations.

Regarding the postponed high-level talks between North Korea and the U.S., the presidential office in Seoul said the delay does not mean that North Korea-U.S. dialogue has lost steam. Indeed, the State Department says that the two sides will reconvene when their respective schedules permit.

When such a meeting occurs and what shape and form it may take remains to be seen.