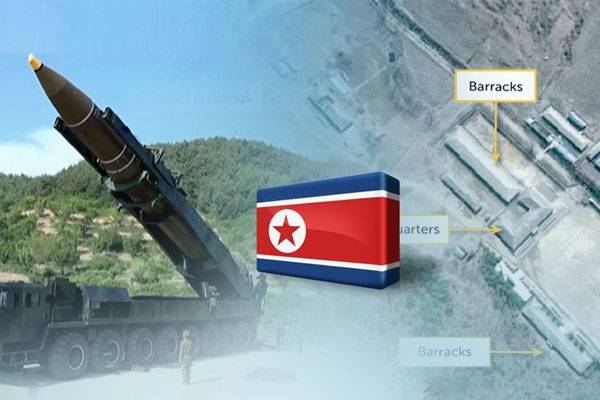 Amid the ongoing stalemate in nuclear negotiations between North Korea and the U.S., a new report detailing a number of North Korean missiles bases is stirring new controversy. The U.S.-based Center for Strategic and International Studies or CSIS released their findings Monday. They claim to have identified at least 13 undeclared missile bases in North Korea. With more, here’s Park Won-gon, international relations professor at Handong Global University.

Beyond Parallel, a research unit specializing in Korean peninsula issues at CSIS, said that it has identified at least 13 out of an estimated 20 missile operating bases undeclared by North Korea in a report appropriately titled “Undeclared North Korea.” It also disclosed satellite photos of the Sakkanmol(삭간몰) missile base.

Citing the analysis of satellite images by the CSIS, the New York Times said on Monday that North Korea has 16 hidden missile bases, characterizing their discovery as a “great deception” by the North. The reports have generated much controversy.

In its report, CSIS paid special attention to the Sakkanmol missile base in North Korea’s Hwanghae Province. Citing satellite photos taken in March, the think tank said that this missile base conceals seven lengthy tunnels that can house up to 18 transporters capable of handling missiles. It also warned that hidden bases like this could be a military threat.

Amid a deadlock in North Korea-U.S. talks, the report is expected to throw weight behind U.S. officials calling for more prudence when dealing with North Korea.

One of the key reasons for the current standoff between North Korea and the U.S. is Pyongyang’s refusal to declare its nuclear and missile programs.

The recent CSIS report demonstrates that key missile facilities in North Korea are identifiable through open-source intelligence. This applies additional pressure for North Korea to declare its nuclear programs sooner rather than later. Also, I think this is a warning message for President Trump. By revealing that North Korea has so many hidden facilities, CSIS warns the American president not to strike the so-called “big deal” with North Korea by signing a peace treaty in exchange for just a partial dismantlement of its nuclear and missile facilities.

For some in the US, the possibility that North Korea may be concealing its nuclear facilities and weapons fuels skepticism about its commitment to denuclearization. There may be renewed calls for North Korea to submit a full list of its nuclear and missile programs before actual dismantlement and verification, putting even greater pressure on the Kim regime.

The report highlights the danger of ballistic missiles once again. One of the major purposes of the Trump administration’s withdrawal from the nuclear deal with Iran was to prevent the Middle Eastern country from developing ballistic missiles. U.S. Secretary of State Mike Pompeo reportedly pointed out the North Korean missile issue during his fourth visit to Pyongyang last month.

I don’t think the Trump administration has an entirely different view from the CSIS report. At the June 12 North Korea-U.S. summit, Trump said that North Korea promised complete denuclearization. Of course, complete denuclearization here includes the termination of ballistic missiles capable of carrying nuclear warheads. This is the official position of the U.S. State Department. As part of efforts to pressure North Korea and gain the upper hand at future negotiations, the U.S. seems to be stressing that the dismantlement of North Korea’s ballistic missile programs comprises the core of denuclearization.

After the U.S. midterm elections, Washington once again stresses the need for sanctions against North Korea and a full declaration and verification of the communist state’s nuclear arsenal.

But many specialists question whether the CSIS report demonstrates any breach in the agreements North Korea has made this year. While the Singapore agreement calls for efforts toward complete denuclearization of the Korean Peninsula, termination of short-range missile bases is not specified in the agreement.

Moreover, the satellite images offered as evidence date back to March, a month before the first inter-Korean summit this year and three months before the North Korea-U.S. summit. Thus it is unclear whether the Sakkanmol site is still active.

Trump himself has downplayed concerns over North Korea’s undeclared missile bases, and the U.S. appears more focused on the North’s nuclear inventory than on the presence of missile bases.

Trump responded quickly to the New York Times report in Twitter, calling the story “inaccurate” and “fake news.” Meanwhile, White House National Security Advisor John Bolton has said that Trump remains prepared to hold a second summit with North Korean leader Kim Jong-un. That suggests the U.S. wants to keep the momentum of dialogue afloat. The U.S. gave a cautious response to the postponement of the high-level talks between the two countries last week, with both sides refraining from criticizing each other. They are reportedly rescheduling the delayed meeting.

It is true that Pyongyang and Washington have differing views on denuclearization. But clearly, they are trying to resolve the problem through dialogue. Although the Democratic Party is rather critical of Trump and has more power after winning the House of Representatives in last week’s midterm elections, the U.S. president still seeks to maintain dialogue with North Korea.

Trump has dismissed the CSIS study as nothing revelatory, perhaps to avoid any unfavorable factors that might affect North Korea-U.S. relations and to keep moving forward with talks.

But the future of dialogue between Pyongyang and Washington remains unclear, as the Democrats have taken control of the U.S. House of Representatives and skepticism about the Trump administration’s North Korea policy amplifies.

The situation is far from easy. North Korea and the U.S. have very different positions on corresponding measures in North Korea’s denuclearization process. I think the problem will be solved when either the North or the U.S. makes concessions.

Under these circumstances, I’d say South Korea’s role is very important. Seoul needs to strengthen cooperation with the U.S. further, while maintaining dialogue channels with North Korea at the same time. That is, South Korea has to use its relations with the U.S. and inter-Korean ties in an effective way so it can lead the process wherein the two Koreas and the U.S. set a specific roadmap and timeframe for North Korea’s denuclearization.

With the North Korea-U.S. talks making little headway, the latest controversy over North Korea’s missile bases is feared to undermine denuclearization negotiations. The South Korean government has a challenging role maintaining trust between itself, North Korea, and the US.