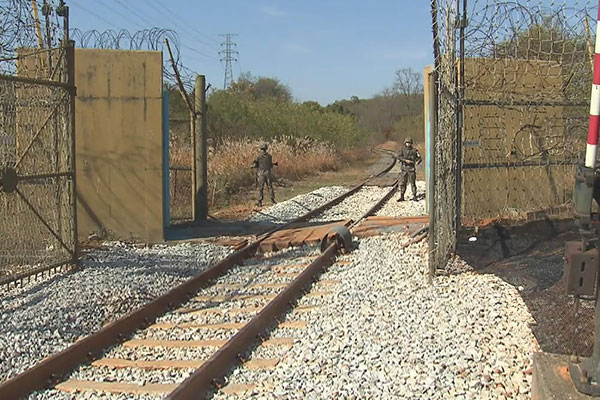 On November 23, the U.N. Security Council Sanctions Committee on North Korea granted a sanctions exemption that allows South and North Korea to carry out a joint field survey of railway tracks in the North. The decision helps the two Koreas remove a major stumbling block in the way of connecting railways between the two countries. With more on the joint project, here’s Professor Kim Yong-hyun from the North Korean Studies Department at Dongguk University.

While discussions are underway to achieve denuclearization of the Korean Peninsula and establish a peace regime, the U.N. believes an improvement in inter-Korean relations is also important. With North Korea still subject to international sanctions, the latest U.N. decision shows that it will actively support inter-Korean economic cooperation programs, including a railway connection project, if there is progress in denuclearization talks.

South and North Korea need to conduct joint railway inspections on the North Korean side in order to connect severed railways on both the western and eastern parts of their peninsula. The inspection requires the delivery of fuel and other materials to the North, although shipment of fuel, among others, is prohibited by international sanctions. The U.N.’s recent measure, however, dispels worries about a possible violation of sanctions.

The U.S. has also decided not to enforce its own sanctions on North Korea as far as railway inspections are concerned. The decisions made by both the U.N. and the U.S. pave the way for the inter-Korean joint railway survey to move forward.

The two cross-border railways remain dormant. Technically, it is possible to operate the western Gyeongui Line right now, although it stopped operation after the shutdown of the Gaeseong Industrial Complex. But the eastern Donghae Line is not operable at all.

The railway inspection is part of a summit agreement between the leaders of the two Koreas in April to modernize and reconnect railways and roads across their border.

The field survey was initially scheduled to take place in July, but the plan has been postponed due to some problems, including concerns about sanctions violations. The South Korean government hopes to complete the delayed joint survey as early as possible.

In the joint inspection, a South Korean locomotive with five or six cars will travel to the North, where a North Korean train will run with those cars. After the completion of the joint survey, a groundbreaking ceremony will be held, presumably in mid-December.

Now that the railway project has managed to take its first step, many take it as a positive step in inter-Korean talks as well as North Korea-U.S. dialogue.

The test operation of the railways and some joint research projects will have a positive impact on South-North relations. Seoul and Pyongyang have failed to carry out joint programs properly, except the ones related to their military agreement. In this situation, a groundbreaking ceremony for the reconnection of railways will be highly significant.

Of course, it’s hard to say that the railway project alone will influence North Korea-U.S. relations positively. But it will at least contribute to creating a favorable mood for dialogue. While speculations are high over possible talks between U.S. Secretary of State Mike Pompeo and his North Korean counterpart Kim Yong-chol, the U.S. has shown some flexibility toward the inter-Korean railway project. Clearly, Washington has sent a positive signal to Pyongyang.

The railway survey is a preliminary step to be taken before actually connecting the railroads. Still, launching the survey has a symbolic meaning, as it has been delayed due to the deadlock in denuclearization negotiations between North Korea and the US. Washington’s decision to exempt the survey project from sanctions may be interpreted as demonstrative of its desire to make progress in dialogue with Pyongyang.

By helping facilitate the inter-Korean cooperation project, the U.S. is also believed to throw its weight behind the South Korean government, which stresses the importance of improving inter-Korean relations en route to denuclearization.

Against this backdrop, South Korean President Moon Jae-in is expected to push for more sanctions relief for North Korea at the G20 Summit this week.

I think President Moon will actively push for easing sanctions on North Korea in line with progress in North Korea’s denuclearization. At present, the Seoul government is trying to make it easier for Pyongyang to come to the negotiating table. I imagine the South Korean president will urge the international community to join these efforts.

Much as he did during his trip to Europe last month, Moon will likely use the upcoming G20 Summit as an opportunity to discuss ways to ease international sanctions on North Korea as a means of inducing the North to denuclearize. During his summit with Trump on the sidelines of the G20 Summit, meanwhile, Moon is expected to try to narrow Seoul’s differences with Washington over the denuclearization issue.

For South Korea to jumpstart the North Korea-U.S. talks, however, Professor Kim says that Pyongyang and Washington should each show respective changes.

I think it is important for North Korean leader Kim Jong-un to form a positive mood for talks on denuclearization and a peace regime. Kim and Trump have both demurred to the prospects of a second summit. If they fail to make progress, however, denuclearization negotiations may lose steam, with conservatives and other hardliners in the U.S. putting more pressure on Trump.

At this point in time, Kim needs to take a step back and try to negotiate with the U.S., signaling his active commitment to denuclearization. Trump also has to make his own effort to keep the talks going. And Moon should continue to play a mediating role for the two nations to resume their negotiations. Based on cooperation among the three leaders, discussions about denuclearization and peace efforts should make progress.

Amid the ongoing stalemate in denuclearization talks, the recent sanctions waiver raises hopes that the inter-Korean railway project will contribute to facilitating the inter-Korean peace process. But fully reconnecting and modernizing the cross-border railways depends on North Korea’s willingness to make tangible progress towards denuclearization.