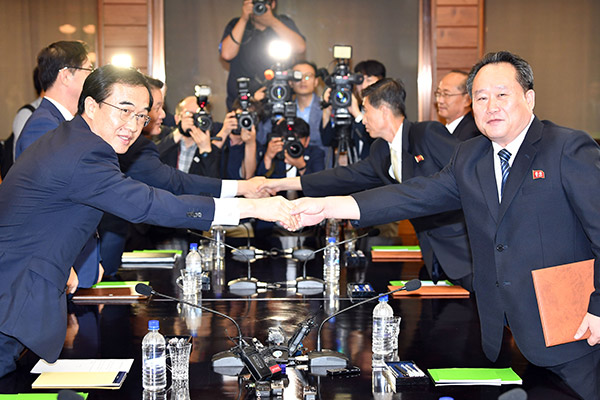 South and North Korea held high-level talks on Monday, August 13, and agreed to hold the third summit between South Korean President Moon Jae-in and his North Korean counterpart Kim Jong-un in Pyongyang in September. Moon will be the third South Korean president to visit Pyongyang, following former presidents Kim Dae-jung in 2000 and Roh Moo-hyun in 2007. The upcoming inter-Korean summit is expected to provide a breakthrough for the deadlocked negotiations aimed at bringing about peace on the Korean Peninsula. Here is Jin Hee-gwan, professor of unification studies at Inje University.

The first summit between Moon and Kim took place in Panmunjom on April 27 and the second one was held on May 26. It will mark the first time in eleven years for a South Korean president to travel to the North Korean capital for a summit. Moon and Kim agreed on various matters at their April summit, and it is necessary to hold more summit meetings to implement the agreements properly. The incoming summit will hopefully enable the inter-Korean agreements to gain traction and also play a certain role in resolving issues between North Korea and the U.S.

At the first summit between Moon and Kim in April, the two leaders agreed on an “autumn summit.” Now Seoul and Pyongyang have specified “September,” but the exact date for the summit was not announced.

I imagine the two sides had to consider many things to set a specific date for the summit. But after the talks, chief North Korean delegate Ri Son-kwon told reporters that the date for the summit had already been agreed upon. His comment is seen as an expression of North Korea’s displeasure at some details. It also indicates that it will be difficult for North Korea to hold a high-profile inter-Korean summit ahead of September 9 that marks the 70th anniversary of the establishment of the North Korean regime. South Korea also finds it hard to visit Pyongyang around the North’s politically important anniversary. That’s because focus may not be placed on the inter-Korean summit itself but the South Korean president’s visit might be mistakenly viewed as his attendance at the anniversary event.

It is said that the South Korean government initially sought to hold the summit in late August in a move to elicit the declaration of an end to the Korean War from the U.N. General Assembly in late September. But now, many experts say that the government did not set an exact date for the summit in consideration of North Korea’s regime foundation day on September 9, which is one of the biggest holidays in the socialist state. To commemorate the 70th anniversary this year, North Korea is reportedly preparing for a massive military parade. The South Korean president’s visit to Pyongyang right before the anniversary will certainly place a political burden on the Seoul government. Despite a warm and friendly atmosphere at the recent inter-Korean talks, the chief North Korean delegate’s rather subtle remarks at the end of the talks seemed to be aimed at pressuring South Korea to play a more active role in mediating. In this context, how to build a peace regime on the Korean Peninsula will likely top the agenda at the inter-Korean summit in September.

North Korea wants both South Korea and the U.S. to declare an end to the Korean War, since the declaration will lead to the establishment of a peace regime on the Korean Peninsula and a security guarantee for the North Korean regime. If North Korea fails to draw an agreement on this issue from the U.S. this year, it will possibly press ahead with the declaration with South Korea at least. Also, economic cooperation between South and North Korea has not been smooth, due to international sanctions. I guess the North asked the South to push for joint economic projects more actively at the recent talks.

Seoul and Pyongyang are committed to another summit probably because both sides share the view on the need for a breakthrough for denuclearization negotiations that have been at a standstill since the June 12 summit between North Korea and the U.S. At the upcoming summit in September, leaders of South and North Korea are expected to try to find ways to smooth the progress of the stalled denuclearization talks again and to resume bilateral economic cooperation aimed at improving their ties, which are subject to international sanctions on North Korea. In doing so, providing some momentum to facilitate the declaration of an end to the war will be the major task of the summit. The U.S., too, is closely watching the prospective inter-Korean summit.

The U.S. government, in principle, welcomes the upcoming inter-Korean summit. But apparently, it remains more circumspect, compared to the April summit. Now the U.S. seems to be thinking that the result of the summit is more important than the summit itself. In May, prospects for the North Korea-U.S. summit were murky because of a war of nerves between the two countries. Then, South Korean President Moon Jae-in came forward and held his second summit with North Korean leader Kim Jong-un, paving the way for the North Korea-U.S. summit. Now, expectations are running high for Moon’s diplomatic role as a mediator.

Without a doubt, the May 26 inter-Korean summit played a significant role in facilitating the June 12 North Korea-U.S. summit in Singapore. This time, too, President Moon will likely use the inter-Korean summit to deliver the North Korean leader’s opinion to the U.S. more accurately. In the process of improving North Korea-U.S. relations, direct talks between the two countries are important. But it is also crucial to figure out exactly what North Korea has in mind, and that’s the role of the South Korean government. The upcoming summit will remind people of this importance once again.

The inter-Korean summit will be an important watershed in the North Korea-U.S. negotiations, which have made little progress. Moon used the two inter-Korean summits this year to help realize the Pyongyang-Washington summit. We’ll have to wait and see if his third summit with Kim Jong-un will produce results, with the South Korean president facing the test of whether he can still be an effective mediator.