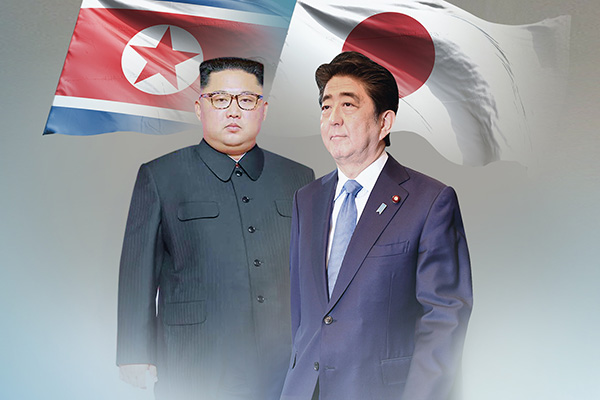 South Korea’s foreign relations are expected to enter the fast lane in September. Summits between leaders and top officials of both Koreas may generate significant progress towards peace on the peninsula. Moreover, progress between North Korea and Japan’s efforts to hold talks are also drawing attention. We’ll take a closer look at the changing North Korea-Japan relations with Oh Kyung-sub, a researcher at the Korea Institute for National Unification.

The Washington Post reported on August 28 local time that Shigeru Kitamura, head of Japan’s Cabinet Intelligence and Research Office, and Kim Song-hye, a senior North Korean official in charge of reunification, held a “secret” meeting in Vietnam in July. This suggests efforts by both sides to resume bilateral talks. The North for their part made a positive first step by releasing a Japanese tourist who had been detained for close to a month near after being apprehended in Nampo, southwest of Pyongyang. The incident has left diplomatic observers optimistic about a breakthrough in North Korea-Japan relations.

Talks of progress in bilateral discussion between North Korea and Japan began to surface after reports of the North’s early release of a detained Japanese tourist, as well news of a secret meeting between officials from both countries in Vietnam. But the two countries have long struggled to define their relationship since Japan re-establishing ties with the Soviet Union in 1956 – then North Korea’s primary sponsor. In 2002, then Japanese Prime Minister Junichiro Koizumi visited the North and signed the Pyongyang Declaration. It recognized the need for the normalization of political, economic, and cultural relationship between North Korea and Japan via comprehensive settlement of the North Korean nuclear issue, as well as missile and abduction issues. However negotiations fell through after North Korea’s second nuclear test and more information of Japanese abductees came to light. This year, Pyongyang and Tokyo are once again looking to make a breakthrough.

From Japan’s point of view, the biggest problem is that it has yet to establish a direct channel for talks with North Korea. South Korea, the United States and China have all opened discussion channels with the North, held summit talks, and are engaged in regular discourse. Some in Japan feel left out, as they are the only state in the region without an official channel. As for North Korea, with the denuclearization issue in a stalemate, it may seek to improve relations with Japan because of the latter’s close ties to the US. Not unlike the current dynamic between Seoul, Pyongyang, and Washington, Pyongyang may attempt to inject itself into the Tokyo-Washington relationship as well.

Unable to establish a direct channel with North Korea, Japan has thus far relied on the US. Japanese Prime Minster Shinzo Abe has requested the US to deal with North Korea about the abduction issue at every given opportunity. Seeing little progress, it seems the Abe government has decided to take matters into its own hands. North Korea also requires Japanese cooperation in the mid to long term. As denuclearization talks with the US continue to drag, North Korea must secure multilateral diplomatic relations and lessen its economic dependence with China. However, one particular issue between the two countries may prove insurmountable.

The most contentious point in North Korea-Japan relations is the abduction issue. When former Japanese Prime Minister Koizumi and then North Korean leader Kim Jong-il held talks in 2002, the Japanese government recognized 17 Japanese nationals as victims of North Korean abduction. Of them, 5 have returned to Japan after Prime Minster Koizumi’s visit to the North. But the two sides could not reach an agreement on the fate of the other 12. North Korea claims that 8 of the 12 have already passed away, while the remaining 4 never entered North Korea, arguing that there is nothing more to be discussed regarding the issue. On the other hand, Japan is calling for the return of all Japanese abductees held in the North. The chasm between them means both states will have to make some hard political decisions. The two sides need to come to a conclusion whether or not the 8 people Pyongyang claims to be dead are truly so, and if additional victims will be able to return to Japan.

Another point of contention is the size of Japan’s economic cooperation with the North. If relations between the two countries are normalized, it is expected that North Korea will be able to receive 10 to 20 billion dollars in reparations as well as economic development assistance from Japan, to compensate for damages incurred during Japan’s colonial occupation of Korea. This is another reason why normalization of relations with Japan is important to North Korea as the latter seeks to improve its economy under Kim Jong-un. North Korea says Japanese atonement for its wartime past is a prerequisite for any normalization of relations between the two. How will Pyongyang-Tokyo relations proceed in the presence of so many obstacles?

Although both sides feel the need for improved relations, it is highly likely that North Korea-Japan relations will mimic progress made towards denuclearization. As the US is largely critical of rapid developments in inter-Korean relations untethered to progress to the denuclearization issue, Japan may approach its bilateral relations with the North in consideration of US interests. So if the denuclearization process accelerates, there is a chance that North Korea-Japan relations may improve in tandem. However, if the nuclear talks fail to gain traction, any movement toward normalizing relations between Pyongyang and Tokyo beyond restoring communication channels may face severe difficulties.

Relations between North Korea and Japan may be turning a new page this year. With Pyongyang and Washington’s denuclearization negotiations serving as the point of inflection in inter-Korean relation, it remains to be seen whether Pyongyang and Tokyo will be able to resolve their differences and come to consensus over major contentious issues. The future remains fluid, just like that of the Korean Peninsula.