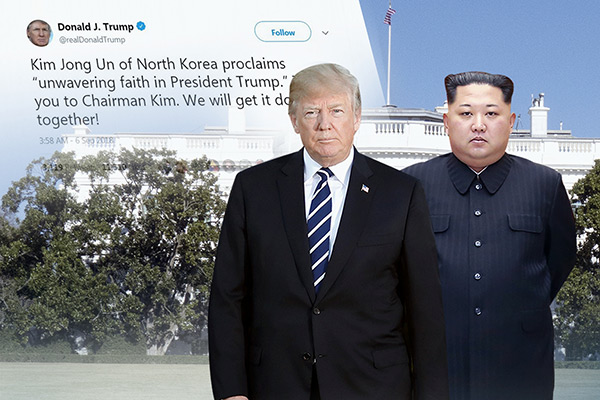 There is a new twist in U.S.-North Korea relations, which seemed to be going nowhere just a month ago when U.S. Secretary of State Mike Pompeo’s planned visit to Pyongyang was cancelled at the last minute. On September 10, the White House said North Korean leader Kim Jong-un had requested a second summit with the U.S. via letter. Here is Jin Hee-gwan, professor of unification studies at Inje University, to give his analysis of the possibility of another U.S.-North Korea summit.

North Korean leader Kim Jong-un and U.S. President Donald Trump have exchanged a few letters. The content was abstract on the whole, but interestingly the latest letter contained a proposal to hold a second summit between the two countries. This suggests that the two sides have fine-tuned their views on this matter to some extent. It seems the Trump government is receptive for now. And North Korea has refrained from provoking the U.S. government lately, as seen in the absence of intercontinental ballistic missiles during a military parade marking the 70th anniversary of its foundation on September 9. Apparently, the North is trying to create a favorable environment for dialogue, and I think Pyongyang’s attitude has drawn a positive response from the U.S.

White House National Security Adviser John Bolton, despite his reputation as a hardliner on Pyongyang, also hinted at the possibility of a second summit by year’s end. Following Washington’s positive response to Kim Jong-un’s request for another summit with the U.S., denuclearization negotiations between the two nations are inclined to move forward. What are the incentives driving Kim Jong-un to propose a second summit with the U.S. president?

Kim announced a five-year economic development plan at the Worker’s Party Congress in May 2016. It was the first party convention since his inauguration. Now, we are half-way to 2021, the target year for the plan. People may brush off the five-year plan as inconsequential, but it is the first such plan in nearly 30 years, proposed at the first party congress in 36 years. In other words, Kim Jong-un did something his father, Kim Jong-il, never did. Nevertheless, it remains challenging for North Korea to achieve its economic goals solely through domestic resources and capabilities. It is thus very important for the Kim Jong-un regime to draw resources from outside by improving relations with the U.S.

Kim seems to be making a sincere effort to build a functional economy, even declaring an end to his signature byeongjin (병진) policy, or “parallel nuclear and economic development”. To that end, the reclusive country needs to escape from the isolation that has only deepened as a result of tough sanctions by the United Nations, the U.S., and others in the international community. Trump, ahead of the November mid-term elections, could spin a second summit with Kim as another achievement towards denuclearizing North Korea. Such political calculations have analysts speculating that a second summit may take place sooner rather than later, and perhaps in Washington, D.C.

Many are predicting that if a second summit is held, it might be sometime in October, before the U.S. mid-term elections the following month. I imagine Trump’s favors Washington D.C. for such a meeting, as the first-ever U.S. visit by a North Korean leader would certainly receive a lot of attention. Considering that media outlets all over the world have personnel in Washington, a North Korea-U.S. summit in the American capital would generate a tremendous amount of media coverage, something Trump is likely very aware of. Of course, Kim may prefer Pyongyang to Washington. But judging from his apparent enthusiasm recently to focus on improving North Korea-U.S. relations, Kim may be willing to travel to D.C.

Amid the growing possibility of a second North Korea-U.S. summit in Washington, attention also turns to whether the two sides will move past a deadlock in the denuclearization issue. At their first summit in Singapore in June, Kim and Trump reached agreement on three points: denuclearization of the Korean peninsula, a security guarantee for the communist regime, and the normalization of relations. Three months have passed since then, but subsequent negotiations have yielded little fruit. The U.S. is insisting that North Korea disclose all details of their nuclear and missile programs as well as dismantle and surrender at least part of its nuclear arsenal. But North Korea has yet to take any practical steps forward, instead calling for “a synchronized approach” in which denuclearization proceeds lockstep with concessions from the international community, such as a formal peace treaty officially ending the Korean War and sanctions relief.

North Korea’s biggest goal is the declaration of an end to the war. Pyongyang has consistently questioned how the U.S. expects to move forward without first addressing a peace treaty. If Trump wants to produce results at his second summit with Kim, he should make a decision on this and other issues. Some analysts predict that the two sides may consider establishing a more stable dialogue channel, like a liaison office or an office of representatives in Pyongyang and Washington, rather than just the occasional high-level meetings with U.S. Secretary of State Mike Pompeo. If the two countries manage to bring about this change in their relations, their second summit is likely to proceed and produce some positive outcomes.

Pyongyang and Washington have yet to find a way to reconcile their differing priorities. A second summit, if it occurs, is expected to ameliorate this issue. We’ll have to wait and see whether such a meeting will resolve the ongoing political stalemate between the two sides.