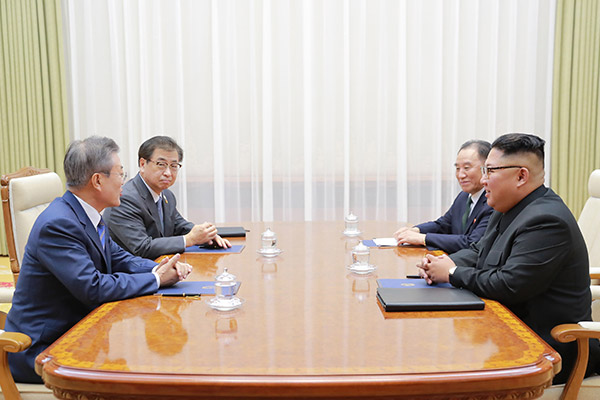 South Korean President Moon Jae-in and North Korean leader Kim Jong-un held a three-day summit in Pyongyang beginning Tuesday, September 18 to Thursday, September 20. Both leaders are working towards establishing permanent peace between the two Koreas. Moon and Kim revealed the “September Pyongyang Joint Declaration” on the second day of the summit, the third such inter-Korean statement after one in Panmunjom on April 27 and another on May 26. Here is Professor Choi Soon-mi at the Institute of Unification of Ajou University explaining the significance and possible outcomes of the latest inter-Korean summit in Pyongyang.

The recent summit was the third meeting between the leaders of the two Koreas under the Moon Jae-in government. This year, the South-North summit took place first, followed by a South Korea-U.S. summit, and then a North Korea-U.S. summit. It shows that inter-Korean dialogue has led North Korea-U.S. talks as well as those between South Korea and the U.S.   Compared to the past, the sequence of talks is rather unique. The latest summit was also led by the two Koreas, which I think is highly significant.

Having established himself as a mediator between North Korea and the U.S. in their denuclearization talks, international attention was paid to whether the South Korean president’s Pyongyang visit would help jumpstart stalled North Korea-U.S. dialogue, which once seemed to be moving quickly after U.S President Donald Trump met Kim Jong-un at a summit in June. Thus, expectations were high for this week’s summit in Pyongyang.

Kim Jong-un came to the airport himself, with his wife Ri Sol-ju. It was impressive to see the warm greetings between Kim and Moon with a hug, a formal greeting between the first ladies, and apparent lively conversation. Moon and Kim rode together through the streets of Pyongyang during a car parade, and later the South Korean president met local residents up close, holding their hands. Moon and Kim held summit talks on the very first day, also a different scene from the two previous inter-Korean summits in 2000 and 2007. It reflected their determination to discuss pending issues extensively and reach an agreement quickly.

From the beginning, the 2018 Pyongyang summit represented many firsts. It was the first time Kim Jong-un has held an inter-Korean summit in Pyongyang, and he treated the South Korean president with the highest level of courtesy. And it was the first time that two Korean leaders went to work on the first day at a Pyongyang summit, apparently aware of the high expectations for improved inter-Korean relations and a possible second-summit between Trump and Kim. And on just the second day of the meeting, the results of the inter-Korean summit were revealed.

The most attention-grabbing part was, of course, denuclearization of North Korea. The summit failed to live up to prior expectations that North Korea may reveal a list of nuclear facilities or Kim Jong-un might directly mention “denuclearization.” But the joint statement did mention steps for North Korea’s denuclearization, including a permanent shutdown of its missile engine test site and launch pad in Dongchang-ri, and even additional measures like permanent dismantlement of the Yongbyon nuclear facility. As we know, complete denuclearization cannot be achieved overnight. Moreover, this issue involves not only the two Koreas but the U.S. as well. If the recent inter-Korean summit successfully paves the way for another North Korea-U.S. summit or creates a favorable environment for their talks on these issues, I’d call it meaningful progress.

North Korea reportedly began to dismantle the Dongchang-ri missile test site in July. But unlike the partial destruction of a nuclear test site in Punggye-ri in May, which the North invited foreign journalists to cover live, the dismantlement of the missile test cannot yet be independently verified. That’s why the U.S. doubts Pyongyang’s sincerity. However, a permanent, verified shutdown of the Dongchang-ri missile test site may represent in some form North Korea’s acquiescence to Washington’s verification requirement. The denuclearization measures agreed upon at the latest inter-Korean summit are expected to be discussed in depth during the South Korea-U.S. summit scheduled for next week. In addition to the nuclear issue, Moon and Kim agreed on several more measures.

The declaration indicates the two Koreas’ commitment to putting an end to their decades-long military hostility and maintaining peace. Specifics on ways to ease military tension were discussed at the inter-Korean working-level military talks last week. In the Pyongyang Declaration, the two sides agreed to hold ground-breaking ceremonies for connecting cross-border railways and roads within this year. They also showed their determination to normalize the operation of the Gaeseong Industrial Complex and tourism to Mt. Geumgang, and promised to discuss the creation of a special joint economic zone in the West Sea and a special tourism zone on the East Sea. The declaration also address humanitarian concerns, specifically families separated by the Korean War, as the Moon government has consistently demanded. To this end, the two Koreas promised to open a permanent reunion center at Mt. Geumgang for family reunions, establish virtual reunions through live video feeds, as well as exchanges of messages between separated family members. Additionally, the South and the North committed to exchanges in various areas, including culture, art, and sports. And I guess a previous joint project to compile a unified Korean dictionary will resume. It is also notable that the North Korean leader promised to visit Seoul at an early date, with Moon saying it could happen by years end, barring unforeseen circumstances. So we may see yet another inter-Korean summit this year.

The Pyongyang Declaration builds on the Panmunjom Declaration signed in April, as the former contains specific ways to implement bilateral agreements. In particular, the two leaders made it clear there will be no hostilities on the Korean Peninsula and they will usher in an era of peace. Starting from defusing military tension, the two Koreas will work towards denuclearization of the peninsula. They also presented detailed measures to increase levels of cooperation and exchanges in order to further reduce hostilities. Lastly, North Korean leader Kim Jong-un promised to visit Seoul, in what would be the first-ever visit to the South Korean capital city by a North Korean leader. It is believed by many that South and North Korea have moved a step closer to ending their Cold War confrontation and establishing permanent peace.