Countdown has Begun for Inter-Korean Summit 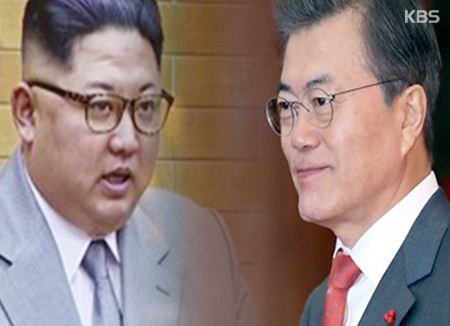 South and North Korea are accelerating preparations for their bilateral summit, which will take place on April 27. The Seoul government is working to include North Korean leader Kim Jong-un’s strong commitment to denuclearization and regular inter-Korean summit talks in a joint declaration for the 2018 South-North summit. The two Koreas will install a direct hotline between their leaders on Friday, and South Korea’s National Security Office chiefChung Eui-yongor National Intelligence Service director SuhHoon may possibly visit North Korea once again before the summit. International eyes are on the inter-Korean summit, for which Seoul and Pyongyang are putting the final touches on preparations. Here is Chung Young-tae, director of the Institute of North Korea Studies, to examine the characteristics of the upcoming summit talks.

Denuclearization is a key issue for both South and North Korea and an international concern as well. As we know, military tension escalated on the Korean Peninsula due to North Korea’s nuclear weapons development. A summit between South and North Korea is necessary to ease the tension and settle lasting peace in the region. Both Seoul and Pyongyang need to let the world know that they have reached some sort of agreement on these issues. They also need to create public opinion favorable to the summit. In this sense, it will be highly significant to make the summitpublic.

Preparations for the two previous inter-Korean summits in 2000 and in 2007 were made in absolute secrecy. But the 2018 summit is being prepared in such an open manner that even live coverage of the summit is under discussion. As Trump has confirmed that South and North Korea are discussing an end to the Korean War, international attention is growing on the format, time and location of talks about the end of the war. In particular, the venue for the inter-Korean summit is significant.

The border village of Panmunjom is the venue where the Armistice Agreement was signed. In other words, the place is the result of the Armistice Agreement. Holding an inter-Korean summit at this significant place indicates the two Koreas’ future-oriented vision or wish to turn the ceasefire into a complete end to the war and bring about permanent peace.

The three-year Korean War broke out on June 25, 1950, and lasted until July 27, 1953, when the Armistice Agreement was signed at Panmunjom. Since then, the truce village has been the tragic symbol of the division of Korea. But now, it is emerging as a place of peace and reconciliation to discuss a nuclear-free Korean Peninsula, as an inter-Korean summit will be held there next week. Of course, this important change was initiated by the two Koreas’ commitment to denuclearization.

Basically, North Korea had wanted to discuss military and security issues directly and solely with the U.S., completely sidelining South Korea. It would even walk out of the meeting room when South Korea brought up the nuclear or military issues. But in a significant development, Seoul and Pyongyang have arranged a venue to discuss the sensitive topic of denuclearization. North Korea has been under intensifying international pressure and sanctions as a result of its consistent nuclear and missile development. The nation now hopes to discuss denuclearization in an increasingly desperate bid to escape from the sanctions. The Moon Jae-in government in South Korea, for its part, believes that the lingering military tension in the region will hinder national development. The leaders of both Koreas are feeling the need for a breakthrough, and the bilateral summit will come amid a coincidence of interests between the two sides.

The presidential office in Seoul said on Wednesday that the inter-Korean summit and the North Korea-U.S. summit would discuss ways to change the armistice system to a peace treaty through a declaration of an official end to the Korean War. The declaration will be the beginning of the process to end the abnormal ceasefire, which has lasted for 65 years, and establish a peace regime on the Korean Peninsula. If North Korean leader Kim Jong-un shows a more positive attitude toward denuclearization at the inter-Korean summit, the two Koreas will hopefully be able to provide a stepping stone to regional peace and stability.

If North Korea’s commitment to denuclearization turns out to be true, there will be various positive developments. For example, North Korea will stay away from sanctions and pressure to some extent and actively engage in cooperation and exchanges with the outside world. Also, North Korea’s denuclearization will help improve inter-Korean relations, which have been deadlocked due to the North Korean nuclear issue, and also diffuse military tension in the region. If the two Koreas make diverse efforts to build military trust, especially at the summit level, they will surely find an opportunity to minimize military risks and create peace instead.

At the Japan-U.S. summit on Tuesday, Trump said that North Korea and the U.S. have had dialogue at very high levels.

We have had direct talks at very high levels, extremely high levels, with North Korea. I really believe there’s a lot of good will.

According to U.S. media, North Korean leader Kim Jong-un delivered his clear commitment to denuclearization to incoming secretary of state Mike Pompeo. There are some positive signs for North Korea’s denuclearization and a possible declaration of an end to the Korean War. The entire world is watching if a genuine sense of peace will be established on the Korean Peninsula through the inter-Korean summit, which will be held in a week.