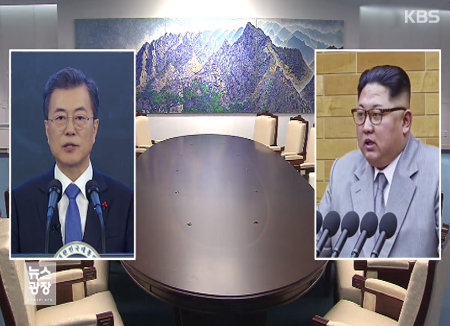 South and North Korea have finalized a schedule for their summit, which is just one day away. South Korean President Moon Jae-in and North Korean leader Kim Jong-un will first meet on Friday morning. The meeting will be broadcast live around the world, signaling the start of the historic 2018 inter-Korean summit. The entire world is watching what the two Koreas will agree upon in their “April 27 declaration.” Here is Professor Park Won-gon from the School of International Studies, Languages and Literature at Handong Global University to discuss the significance and prospects for the important summit.

First, the summit is considered a first step toward peace and stability on the Korean Peninsula. Compared to just last year, when the region was left in the shadow of war, something unimaginable is happening now, as the two Koreas have engaged in dialogue and are ready for a bilateral summit. Secondly, it is the first time for a North Korean leader to step on South Korean soil since the Korean War. Needless to say, this is greatly symbolic. Thirdly and most importantly, the summit is for North Korea’s denuclearization. “Unification” was the major topic of the first inter-Korean summit in 2000, while the second summit in 2007 discussed specific ways to develop inter-Korean relations. This time, denuclearization will top the agenda for talks, and South and North Korea will directly touch on the nuclear issue for the first time. This is very important, considering that North Korea’s nuclear weapons development caused a security crisis on the Korean Peninsula.

This year’s inter-Korean summit is widely expected to determine the fate of the Korean Peninsula. If the leaders of the two Koreas terminate the Korean War armistice agreement that was signed at Panmunjom in 1953 and sign a peace treaty that would formally and permanently end the war, the two sides will be able to pave the way for a peaceful future on their peninsula in an unprecedented way. That’s why every moment of the summit merits attention.

One of the major points we can focus on is, as expected, a meeting between Moon and Kim. After Kim crosses the Military Demarcation Line into the South as the first North Korean leader to do so and meets with Moon, I wonder how they look when they greet each other and whether they shake hands or hug each other. Whatever their facial expressions or action, it will be a very symbolic moment in inter-Korean relations. On the second floor of the Peace House at Panmunjom, the two leaders will make introductory remarks before summit talks. The remarks definitely deserve attention. But the key of the summit will be a bilateral agreement to be announced at the end of the summit. We’ll wait and see what the agreement will contain.

The presidential office says that the two leaders will meet near the Military Demarcation Line and attend an official welcoming ceremony at the Freedom House before holding talks at the Peace House. About 3,000 reporters from 460 media outlets from some 40 countries will deliver the news about the first inter-Korean summit in eleven years to the entire world. Special attention is being paid to a possible agreement on denuclearization, which is one of the key discussion topics, along with a peace regime and an improvement in inter-Korean relations. That is because success or failure of the inter-Korean summit and the North Korea-U.S. summit depends on progress in the denuclearization issue. Ahead of the inter-Korean summit, meanwhile, North Korea has made a significant announcement. During a plenary central committee meeting of the Workers’ Party on April 20, North Korea said that it would suspend nuclear and intercontinental ballistic missile tests and dismantle the Punggye-ri nuclear test site. But the North said that it would still possess its existing nuclear weapons. So, for North Korea’s complete denuclearization, intense negotiations are inevitable.

North Korea’s recent announcement of a halt to nuclear and missile tests and the shutdown of a nuclear test site is a positive sign. These are sincere denuclearization measures that the U.S. and the international community have consistently requested. But in North Korea’s announcement, the word “denuclearization” never appears. Rather, the North clearly states that it is a nuclear weapons state. But it is more important how to draw North Korea to denuclearization than what its intentions are. When National Intelligence Service director Suh Hoon was asked if he thinks Kim Jong-un has the genuine intention to denuclearize, he said that he would not assess the situation with a person’s intention, but it is important to choose something meaningful from what he said and induce him to actually implement it. I think he has a point. Interpretations vary over North Korea’s attitude, but I think it is crucial to induce North Korea to implement denuclearization measures.

For North Korea’s complete denuclearization, it is necessary to take corresponding measures, such as eliminating military threats and a security guarantee for North Korea. In regards to this matter, President Moon stressed on Monday that a bright future will be ensured for North Korea if it terminates its nuclear weapons programs. On the same day, the Defense Ministry in South Korea turned off anti-communist propaganda broadcast speakers along the inter-Korean border in the hopes that the suspension will help stop mutual slander between the two Koreas. Expectations are running high for a nuclear-free Korean Peninsula and a shift to a peace regime.

Friday’s summit is highly important because it should find a breakthrough for regional peace. North Korea’s nuclear development has already arrived in the final stage, and there is little room to delay a solution to the nuclear issue. South Korea faces a grave reality that it is difficult to improve inter-Korean ties and settle peace on the Korean Peninsula without resolving the nuclear issue. Regarding the establishment of a permanent peace regime, the declaration of an end to the Korean War is a rather complex issue. I think it will be difficult to go as far as declaring an end to the war. But South and North Korea might agree that they will no longer engage in any hostile acts.

On Friday, South and North Korea will embark on a grand journey toward peace by discussing denuclearization, the declaration of an end to the war and the signing of a peace treaty for the first time in 73 years since national division. The international community is hoping that the 2018 inter-Korean summit will serve as priming water for bilateral reconciliation and cooperation to resolve Korean Peninsula issues eventually.