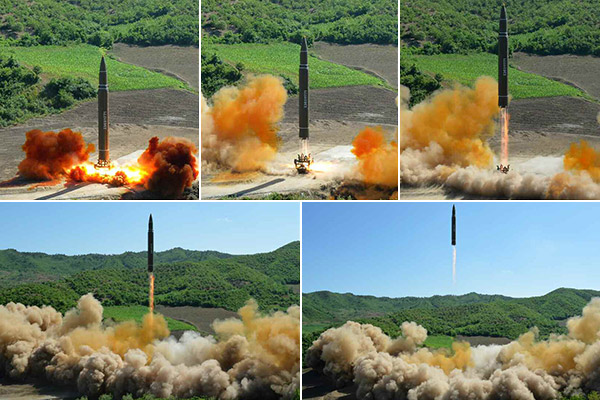 U.S. intelligence authorities and foreign research institutes have already assumed that North Korea has secured the technology of miniaturizing nuclear weapons. But this time, many analysts say it is significant that the possibility has been mentioned in the U.N.’s official document. Here is Cheong Wook-sik, director of the Peace Network, with more.

In addition to North Korea’s possible development of miniaturized nuclear warheads, the report says one country even claimed that the North Korean regime might seek to develop miniaturization further to potentially develop multiple warhead systems. The U.N. report contains information and opinions of several countries, so it is considered more reliable than the assessments of private institutes. While North Korea had been suspected of building smaller nuclear warheads before, the recent report says it is highly probable that North Korea has successfully reached the level of miniaturization.

If a country is equipped with small nuclear warheads and the means of their delivery, such as long-range missiles, it could be considered a nuclear weapons state.

In a press conference in August 2017, South Korean President Moon Jae-in defined the red line North Korea should not cross as completing an ICBM and weaponizing it via nuclear warhead.

In the past, nuclear bombs were typically carried by strategic bombers. The process takes time and the planes are at risk of being shot down. As time passed, mounting nuclear warheads on missiles emerged as a preferable alternative. In 1957, the former Soviet Union succeeded in fitting a nuclear warhead onto an ICBM for the first time in the world. This is very complex technology. The warhead should be strong enough to withstand extreme heat and pressure when reentering the atmosphere. A strong warhead means a heavy one, but it is challenging to fly the heavy warhead atop a missile. So, making warheads small enough to mount on ballistic missiles is an important technology, which determines whether a country is a nuclear state.

When North Korea went ahead with its fifth nuclear test in 2016, it claimed that it successfully conducted a nuclear warhead explosion test. On November 29, 2017, the North fired an ICBM-level missile known as the Hwasong-15. At the time, the country announced that it achieved a historical feat by completing its nuclear force and claimed that the ICBM was capable of delivering a super-sized heavy nuclear warhead. At present, it is widely believed that North Korea is closer to completing technology of making nuclear warheads smaller and lighter. But it is assumed that North Korea has yet to secure technology of preventing a warhead from burning up when making atmospheric reentry.

North Korea has carried out a total of six nuclear tests so far. The first one occurred in October 2006 and the last one, in September 2017, in the form of a hydrogen bomb test. As the tests progressed, explosive power became stronger, with improved detonator technology. That means North Korea was getting closer to making its warheads smaller.

In 2017, U.S. intelligence authorities predicted that North Korea would succeed in developing an ICBM tipped with a nuclear warhead within six months. But during the first summit between North Korean leader Kim Jong-un and U.S. President Donald Trump in June 2018, Kim promised to suspend ICBM testing. Therefore, U.S. intelligence authorities believed that it would take more time for North Korea to develop a nuclear-armed ICBM. On the other hand, a U.S. defense agency in charge of the missile defense system assumed that North Korea’s ICBM development was imminent. There were mixed predictions, even within the U.S.

So, how will North Korea’s possession of smaller nuclear warheads influence South Korea, the U.S. and Japan? North Korea has short-and mid-range missiles, intermediate-range ballistic missiles and ICBMs with a range of around 10-thousand kilometers capable of reaching as far as the continental U.S.  While test-launching those missiles, North Korea demonstrated its weapons delivery capabilities. Its missiles fitted with nuclear warheads, once completed, can be deployed in actual combat.

Regarding the recent U.N. report about North Korea’s possible development of miniaturized nuclear devices, the U.S. administration has expressed concerns over their potential threat on the U.S. mainland.

The U.S. will regard North Korea’s ICBMs equipped with nuclear warheads as a threat. It will also be discouraged from taking any military action against North Korea, in the belief that such action may cause great damage to the U.S. itself. Moreover, nuclear non-proliferation has been one of Washington’s important diplomatic principles. The U.S. has pledged to prevent North Korea from possessing nuclear weapons for the past 30 years. But all of its efforts will be in vain if Pyongyang successfully develops a nuclear warhead-tipped ICBM.

Meanwhile, the South Korean Ministry of Defense has expressed its view on North Korea’s warhead miniaturization capabilities. In a regular briefing on August 4, deputy spokesman for the ministry Moon Hong-sik said that North Korea appeared to have made considerable progress in its ability to miniaturize nuclear warheads. He also said that the South Korean military is closely monitoring North Korea’s nuclear and missile activities and that South Korean and U.S. intelligence authorities are maintaining a close cooperation system. How should the Seoul government prepare for North Korea’s advanced nuclear weapons capabilities?

South Korea has already secured deterrence against North Korean military threats at a considerable level. It is important to maintain and manage the deterrence appropriately. South Korea doesn’t feel threatened by nuclear weapons states, such as the U.S., Russia, China, the U.K. and France. Not those countries lack nuclear capabilities, but because it maintains good relations with those nations. Likewise, it is necessary for Seoul to make efforts to improve inter-Korean relations as well as North Korea-U.S. ties. South Korea should focus on creating favorable conditions to resume the suspended peace process on the Korean Peninsula as well as nuclear negotiations between the North and the U.S.

Many analysts say that North Korea has bought some time to enhance its nuclear capabilities, while its denuclearization talks with the U.S. have been stalled since 2018. It is necessary to make greater efforts to analyze and prepare against North Korea’s seemingly ever-intensifying nuclear and missile threats.