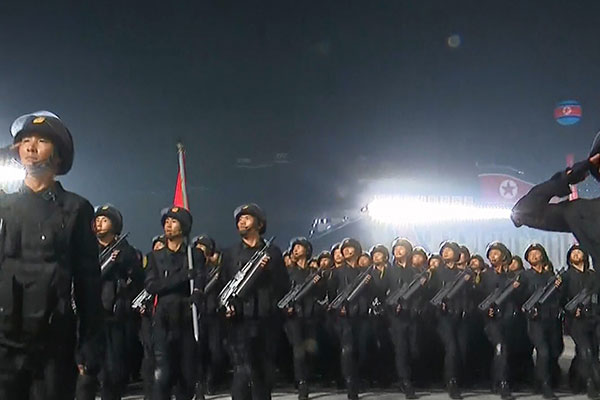 Some 600 vehicles mobilized at Pyongyang's Mirim airfield have been captured on satellite imagery, apparently preparing for a military parade.

According to photos released on Monday by U.S.-based satellite image tracker Planet Labs, 600 to 650 vehicles are parked on a green area near the airfield while other cars on the move were also spotted on an airstrip to the south.

Radio Free Asia said the number of parked vehicles, estimated in February to total around 150, has increased by more than four fold.

The report also speculates that at least 75-hundred to eight-thousand troops are mobilized at the site based on images showing 25 to 30 columns of troop formations.

A South Korean military official told reporters on Monday that more than six-thousand troops are gathered at the airfield.

It appears increasingly likely that North Korea is preparing to hold a large-scale parade next month. April 15 marks the 110th anniversary of the birth of the regime's late founder, Kim Il-sung. April 11 and the 13 are ten-year anniversary dates of current leader Kim Jong-un's appointment as first secretary of the ruling Workers' Party and first chairman of the state defense commission, respectively.