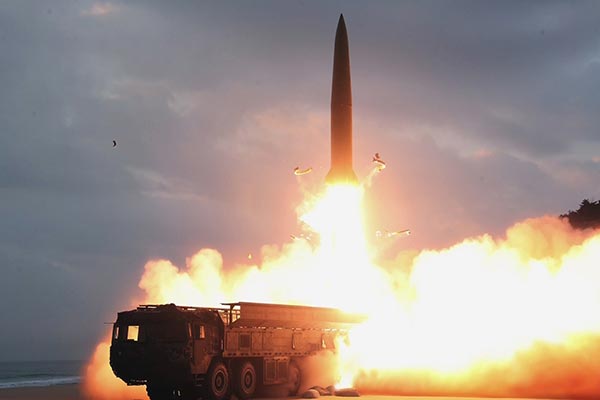 North Korea on Thursday fired a long-range projectile, suspected to be an intercontinental ballistic missile(ICBM).

According to South Korea's Joint Chiefs of Staff(JSC), the missile was likely launched at a higher angle than usual toward the East Sea.

Given JCS's indication that the projectile was a long-range ballistic missile, the North could have tested its new Hwasong-17 ICBM. The launch location is believed to be Pyongyang's Sunan airfield.

The North also fired ballistic missiles on February 27 and March 5 which, according to assessments by South Korea and the U.S., were tests of an ICBM system.

The regime followed up with another launch, apparently of the same type of missile, on March 16, but that ended in failure as the missile exploded in midair.

Thursday's provocation could be a move to make up for that failure in its attempt to advance its new ICBM technology.

If the latest test fire is confirmed to be an ICBM, Seoul and Washington are expected to respond sternly, viewing it as having crossed the red line.