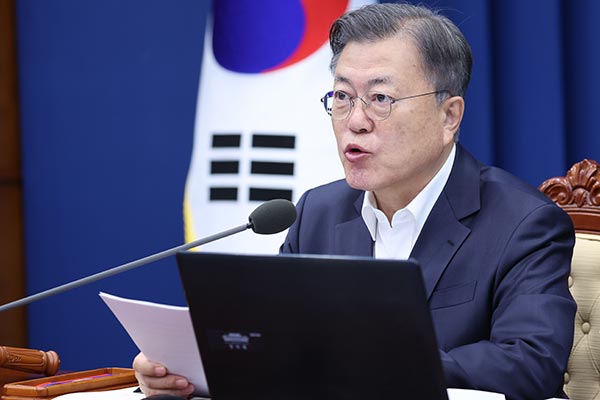 President Moon Jae-in said that North Korea's missile launch, which appears to be an intercontinental ballistic missile(ICBM), clearly violates the self-imposed moratorium on ICBM tests that North Korean leader Kim Jong-un had pledged to the rest of the world.

The presidential office conveyed Moon's remarks made from an emergency National Security Council(NSC) meeting that the president presided over Thursday afternoon.

The presidential office said that President Moon strongly condemned North Korea's missile launch, saying that it not only threatens the Korean Peninsula, the surrounding region, as well as the international community, but also is a clear violation of the United Nations Security Council Resolutions.

During the meeting, Moon called for close cooperation with related countries and the international community during this transitional period, and also called for authorities to cooperate with the president-elect.

Earlier in the day, the Joint Chiefs of Staff(JCS) said that North Korea had fired a projectile of unknown classification toward the East Sea, later explaining that it appeared to be a long-range ballistic missile.

According to the JCS, the missile flew some one-thousand-80 kilometers, at an altitude of over six-thousand-200 kilometers.