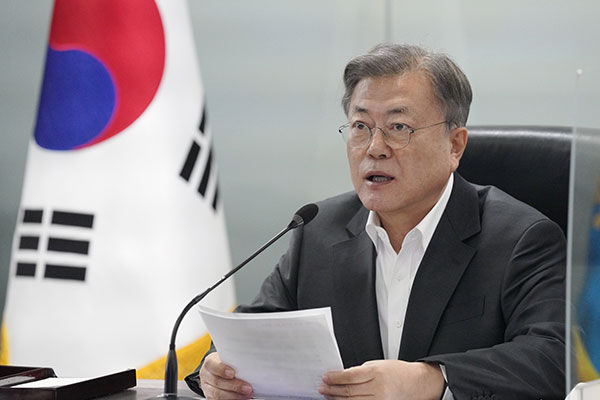 President Moon Jae-in says security on the Korean Peninsula has become a grave matter in the wake of North Korea's launch of a long-range ballistic missile on Thursday.

Moon made the remark in a social media post on Friday marking the seventh Yellow Sea Defense Day.

The day commemorates the 55 patriotic servicemen who sacrificed their lives defending the Yellow Sea in three North Korean military provocations in 2002 and 2010 – a skirmish near Yeonpyeong Island, the sinking of the Cheonan warship and the deadly shelling of Yeonpyeong Island. Since 2016, the government has observed Yellow Sea Defense Day on the fourth Friday of March.

Moon said the best way to repay the heroes of the Yellow Sea for their service and sacrifice is to strive for peace through impregnable defense. He stressed that the nation is working to build an ironclad security and peace.

The president noted that the nation’s defense budget has posted growth of six-point-three percent on average every year. The budget topped 50 trillion won in 2020, and 54-point-six trillion won has been earmarked for defense spending this year.

As he listed numerous achievements made in terms of national defense, the president noted the unveiling of the first prototype of the domestically-developed fighter jet, the KF-21, and the commission of the Dosan Ahn Changho-class submarine, the nation's first three-thousand-ton underwater vessel developed at home.