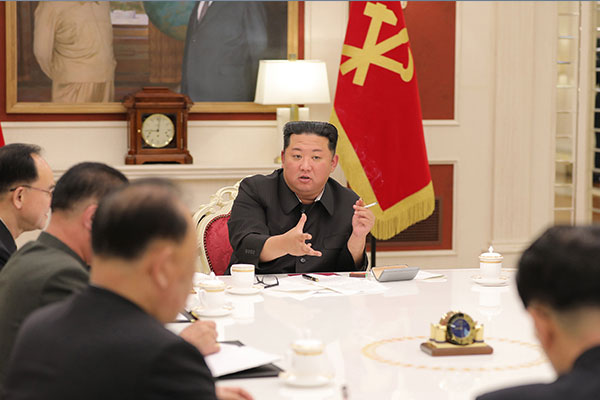 North Korean leader Kim Jong-un has reprimanded senior North Korean officials for failing to properly deal with COVID-19 early on amid the rapid spread of the virus in the nation.

The North’s official Korean Central News Agency(KCNA) on Wednesday said Kim presided over a meeting of the Presidium of the Political Bureau of the Central Committee of the Workers’ Party the previous day to discuss coronavirus infections and other domestic issues.

According to the media outlet, Kim criticized the immaturity of national organizations in the early stages of coping with what he called the “first quarantine crisis since the founding of the nation,” and rebuked the passiveness and complacency of leading officials over the matter.

Criticizing officials for a worsening of complexity in a race against time, Kim urged “every unit and worker” to be aware of the gravity of the situation and stay alert against a lack of perception and preparations as well as arbitrary interpretations and behaviors.

According to the North’s national emergency quarantine headquarters, around 233-thousand new fever cases were reported throughout the North between 6 p.m. Monday and 6 p.m. Tuesday, with the total suspected COVID-19 caseload since late last month surging to over one-point-71 million.

It said six people died in the 24-hour period, bringing the death toll to 62.