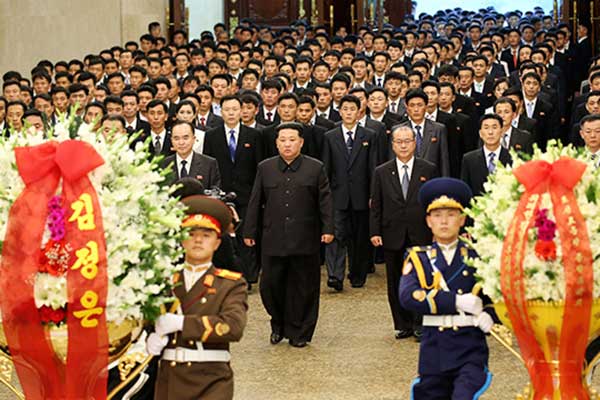 The North's state-run Korean Central News Agency(KCNA) said Kim visited the Kumsusan Palace of the Sun in Pyongyang, a mausoleum where the embalmed remains of the late founder, as well as those of his son Kim Jong Il lie in state.

Kim Jong-un was accompanied by Jo Yong-won, secretary for organizational affairs of the ruling Workers' Party's Central Committee, Ri Il-hwan, secretary of the Central Committee, as well as participants of the party's special workshop that ended on Wednesday, as they laid wreaths in front of 20-meter statues of the two .

It was the first time Kim visited the mausoleum with members of a particular gathering, indicating the importance of the recent workshop aimed at solidifying the "monolithic leadership system" under Kim.

Kim has paid tribute on the anniversary of his late grandfather's death every year, accompanied by his wife Ri Sol-ju and close confidantes, since taking power in 2012, with the exception of 2018.