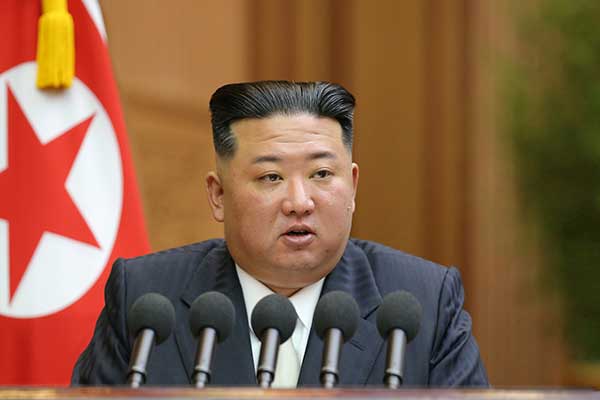 North Korean leader Kim Jong-un has reaffirmed the necessity to maintain North Korea’s nuclear arsenal to prevent the collapse of the regime as desired by the United States.

The North’s state-run Korean Central News Agency reported on Friday that Kim issued the hardline stance in a speech delivered on Thursday during a meeting of the Supreme People’s Assembly.

Kim said the U.S. claims its aim is to eliminate the North’s nuclear arsenal but its ultimate objective is the collapse of the regime by pushing Pyongyang to surrender its right to self-defense following nuclear disarmament.

The leader said the U.S. is pursuing the North’s denuclearization through the strongest sanctions yet, but even in the face of one hundred years of sanctions, the nation will never lose its resolve.

Regardless of the hardships the country must endure, Kim said, the regime can never relinquish its nuclear weapons if it is to keep the U.S. in check after the enemy state created the political and military conditions on the Korean Peninsula.

Meanwhile, North Korea on Thursday celebrated the eve of its Day of the Foundation of the Republic, with the North’s Korean Central Television reporting that Kim Jong-un and his wife attended the ceremony to celebrate the 74th anniversary of the North Korean government’s establishment in Pyongyang on Thursday evening.