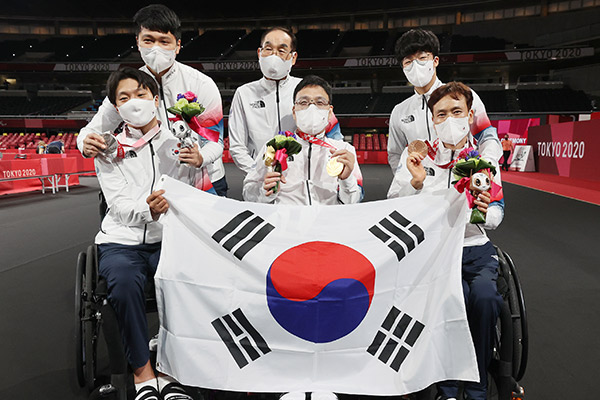 Joo Young-dae, the silver medalist at the 2016 Rio Games, defeated fellow South Korean Kim Hyeon-uk with a set score of three-to-one on Monday, during the gold medal match at the Tokyo Metropolitan Gymnasium.

Another teammate and Rio bronze medalist Nam Ki-won, who already secured a bronze medal, looked on as Joo, the veteran, won the first two sets.

The world's fifth-ranked Kim fought back to secure the third set at eleven-to-two. The fourth set was a tight match that led to a deuce, before Joo gained a two-point lead to victory.

Class one table tennis, one of eleven classes reflecting the degree of impairment, is an event in which South Korea has won many Paralympic medals since winning the first gold in men's singles in 1972.

Joo's victory, however, is the first since the 2000 Sydney Games, and this is the first time that the country has won gold, silver, and bronze in the same class.

Thomas Matthews of Great Britain won the other bronze medal for the event.