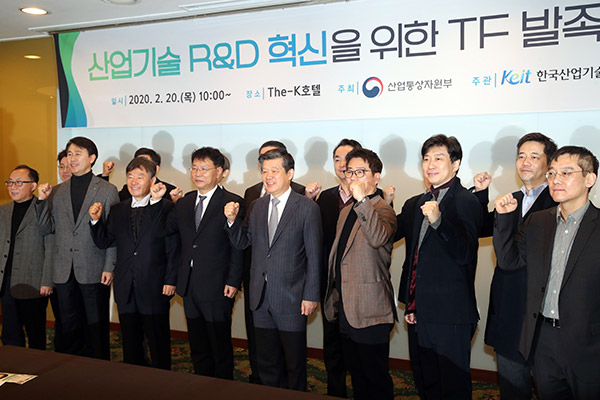 The Moon government’s three leading economic policies are income-led growth, innovative growth and a fair economy. So far, the government has raised the wages of households that have benefited relatively less from economic growth in an effort to enhance fairness. As the low growth trend is showing signs of extending further amid declining exports, diminishing investment and weak consumption, the government has now shifted a focus to innovative growth for an economic recovery. For that purpose, it will make investments both in an aggressive and preemptive way.

The Korean economy has relied heavily on the manufacturing industry. But the industry cannot increase production anymore, only shedding jobs. In fact, the manufacturing sector has been in a crisis for quite a long time. The nation needs something else that could replace the industry. As an alternative, the government proposes fostering the so-called DNA industry, referring to data, network and artificial intelligence or AI, and three new industries that include system semiconductors and bio-health.

Speaking of semiconductors, which have propped up the nation’s growth, Korea has been a powerhouse of memory chips. But now, it must prepare for the post-semiconductor era. One of the government’s plans is to nurture the non-memory-based system semiconductor field.

Under the slogan of “another economic take-off and a new future,” the Ministry of Economy and Finance has put forward the “4 plus 1” strategy. First, it seeks to bring innovation to existing industries and markets. Second, it will explore new industries and markets. Third, it will secure innovative technologies and boost research and development or R&D. Fourth, it will cultivate new talents and foster innovative finance. And the government will improve systems and infrastructure to implement these four initiatives effectively.

To be more specific, it will introduce smart technologies in major industries, invigorate the data economy, increase tax benefits to promote investment in fifth-generation or 5G networks and raise its R&D investment to 22 billion US dollars.

All of these plans are aimed at securing world-class technologies and developing future growth engines. In the U.S., IT firms that have strength in technologies of the Fourth Industrial Revolution are already leading the economy.

The American economy is represented by prominent technology companies known as FAANG, which refers to Facebook, Apple, Amazon, Netflix and Google. These firms began to appear in the late 1990s. In the 20th century, the U.S. economy was led by the manufacturing industry. But General Electric Company, the iconic U.S. manufacturer, was removed from the Dow Jones Industrial Average in 2018, indicating a radical change in the industrial map. The post has been replaced by platform companies that have built a new digital ecosystem. Industry watchers say Korea should follow suit.

The U.S. economy has been faring pretty well in recent years. Innovative companies represented by FAANG have created new growth engines to help the New York stock market continue to rise to a record high. Some IT firms have grown so fast that they became listed companies less than ten years after their foundation. On the back of the brilliant performance of tech companies, U.S. gross domestic product or GDP grew at an annual rate of 3.2 percent in the first quarter of 2019.

Korea, on the other hand, still depends on its manufacturing sector. Unfortunately, the industry continues to lose competitiveness. The overseas market share of Korean manufactured goods, except semiconductors, has remained stationary over the last decade since the global financial crisis. Korea is in desperate need of new growth engines. To promote innovative growth more effectively, the government will drastically lift regulations that may hamper the development of new industries.

New technologies will bring about new products and industries to form new markets. But they may clash with existing products. When automobiles appeared, they came into conflict with horse-driven carriages.

After all, it was right to ease relevant regulations, which were a stumbling block standing in the way of the development of automobiles. Similarly, sweeping deregulation is needed to make new technologies take root and flourish so they will lead to new industries and new jobs.

Easing or removing regulations is essential to foster new industries. Innovative industries will inevitably collide with existing ones in the course of entering the market. If the conflict is not resolved properly in the process, it will take more time to expand the new market created by technological innovation. Also, innovative companies might be blocked from advancing into the global market. As part of deregulation efforts, the government has proposed the “one-step model,” in which people or industries concerned each take a step back to reach a compromise.

To drive innovative growth, the government will expand relevant infrastructure and make full use of its budget, taxation, finance and manpower. Now, the remaining task is to put the plans into action.

Creating a new ecosystem is far from easy, as akin to creating an entirely new world.

Relevant policies should be carried out systematically based on a full understanding of the new ecosystem. Inadequate preparations may end up as a mere slogan. The key is how clearly the government understands the situation and how systematically the plan is implemented.

It will take a considerable amount of time for innovative growth to bear fruit. Now that the government has presented innovative growth as the major economic topic of the year, it will be important to execute the plans consistently and systematically.