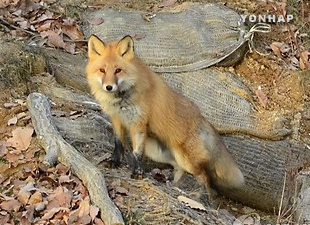 A fox with nine tails called gumiho in Korean often appears in Korean oral tales or legends. There are various versions of this creature, which often transforms itself into a beautiful woman. Sometimes it has to wait for a thousand years to turn into a human being. In other stories, a gumiho is supposed to eat the livers of 1,000 men within the period of 1,000 years to become human. Contrastingly, yet another version would say that a gumiho can become a human being if it can last 1,000 years without eating or killing anything, while also concealing its true identity to people. Tales associated with the nine-tailed fox may vary in plot, but one thing that they share in common is that the creature’s earnest wish and ultimate goal is to become human.

Today’s folktale “The Fox Bead” is one of these nine-tailed fox stories. Once upon a time, there lived a young boy in a small village. He had to pass by a hill to reach a village school he was attending. One day, as always, he was passing the desolate hill on his way to school. Suddenly, a pretty girl appeared out of nowhere. Even before the startled boy said something, the girl grabbed his hand and dragged him into the woods. In a little while, he saw a grand mansion. She took him inside the mansion and abruptly hugged him. Then, she pushed a bead from her mouth into the boy’s mouth with her tongue. She soon pulled it back with her tongue and put it in her mouth again. Smiling, the girl brought him to the place where they first met. The boy thought it was very strange, even wondering if this was a dream, but he continued on his way to school.

The next day, he saw the same girl waiting for him at the same place. As if being possessed by something, he followed the girl and let her do the same thing she had done the previous day in the secretive mansion. The same ritual continued for weeks. As time went by, the boy became weaker and weaker. It was his teacher who noticed a change in the boy who grew thinner and paler. One day, the teacher looked at his pasty face and asked him what had happened to him. The boy hesitated to say at first but finally told the teacher about his strange experience. Hearing the whole story, the teacher thought for a moment. After a while, he advised the boy to put the bead in his mouth and not to give it back to the girl next time. The teacher also told him to swallow the bead instead and look at the sky. The boy listened carefully to the teacher’s instruction.

The following day, when he passed the hill, the mysterious girl appeared again and took him to the mansion. As expected, she put the bead in his mouth. Remembering his teacher’s advice, the boy swallowed the bead quickly. But he forgot to look up at the sky as his teacher had told, and he looked down at the ground. All of a sudden, the girl began to cry bitterly. She spoke with sobs, “I’ve eaten 99 and was about to have the last bead. Now that you took the last one, I’m doomed! Why did you do that?” With these words, she collapsed. To the boy’s surprise, she became a fox with nine tails. In a moment, the fox perished and the mansion disappeared.

Later, the boy was told that the fox had been swallowing the spirits of people with the strange bead. If it had eaten up 100 spirits, it would have become human forever. Having lost the bead before reaching the 100th, however, the fox died. Meanwhile, the fox bead had already taken in 99 spirits, and the astonishing power within the bead was transferred to the boy. If he had looked up at the sky after swallowing the bead, as his teacher had instructed, he would have mastered all the secrets of the heavens. Because he looked down at the ground, however, he was able to learn something about the earth, namely, how the human world was working, but could not know about the heavenly things that dominate the universe.
Share
Print
List