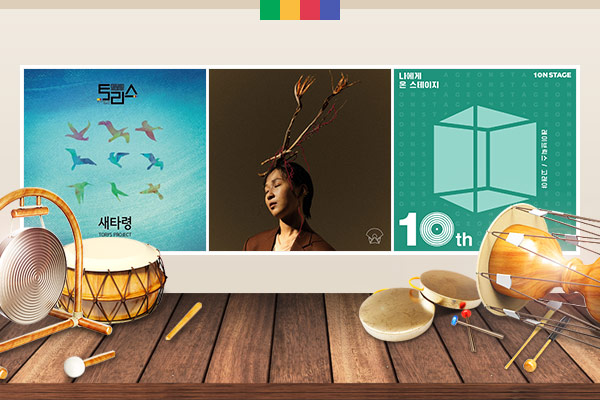 Korea is not that big a country, but each region has a distinct dialect perhaps from being separated by many rivers and mountains. Variations in intonation is bound to result in different musical characteristics. Regional dialects are called “saturi사투리” in Korean and regional musical attributes “tori토리.” Folk songs of Jeolla-do Province such as Jindo Arirang and Yujabaegi육자배기 are called “yukjabaegi tori육자배기 토리,” those from Hwanghae-do황해도 or Pyeongan-do평안도 Provinces “Sushimga tori수심가 토리” and those from the Yeongnam영남 region including Miryang Arirang “Menari tori.메나리토리” A gugak band named Toris토리스 was formed to bring all these different tori pieces from various regions and make music that can be enjoyed by everyone. Toris is also the only gugak a cappella group in Korea. The group, formed in 2009, is comprised of vocalists specializing in pansori, Korean folk songs, and a cappella. Let’s begin this week’s episode with Toris singing “Saetaryeong새타령” or “Bird Song,” a folk song from the southern region.

Coming up next are two young female singers who are gaining attention with their unique voices and styles. First one is Chudahye Chagis추다혜 차지스. Chu Dahye may not be a household name yet, but many people have heard about a gugak band called Ssing Ssing. Well-known for their unusual, flashy appearances and eye-catching performances, Ssing Ssing was instrumental in publicizing Korean folk songs to people around the globe. Chu Dahye, who majored in Korean folk songs from the western region, was the band’s only female vocalist. She said she was able to learn a lot about making new music based on tradition during her time with the unconventional band. When Ssing Ssing was disbanded, she went off in search of her own voice and recently formed a band named after herself. Comprised of guitar, bass, and drum, Chudahye Chagis released an album inspired by shamanistic music. Today we will first hear “Eheori Ssunggeoya에허리 쑹거야,” music used when performing a shaman ritual wishing for a bountiful catch in the western coastal area. The exact meaning of the term “ssunggeo쑹거” is not known, but the word is used when the sea god allows a big catch or when a shaman priestess offers wine to pray for people’s longevity. It will be followed by “Surisurimahasuri수리수리마하수리” sung by Lee Na-rae, who is also a member of the famous Leenalchi Band. She, who majored in pansori, released her own version of the now-forgotten pansori “Byeon Gangsoi Taryeong변강쇠타령.” “Surisurimahasuri,” an aria from that pansori, describes how Byeon Gangsoi is punished by the totem poles from around the country when he used a totem pole as firewood.

Next gugak band is Coreyah고래야, which has been performing for 10 years now. The band’s name represents their desire to captivate people with long-standing sentiments. The band combines traditional instruments like geomungo and janggu with western ones like guitar and drums. Before Coreyah came to the gugak scene, traditional musicians playing fusion music would be classified as gugak musicians. But Coreyah’s music, which has traditional themes and is played with traditional instruments, is categorized as “popular music.” Coreyah is probably the first band to take down the barrier between gugak and popular music. Here’s Coreyah performing “I Am My Destiny.”

Music 3: I Am My Destiny/ Performed by Coreyah