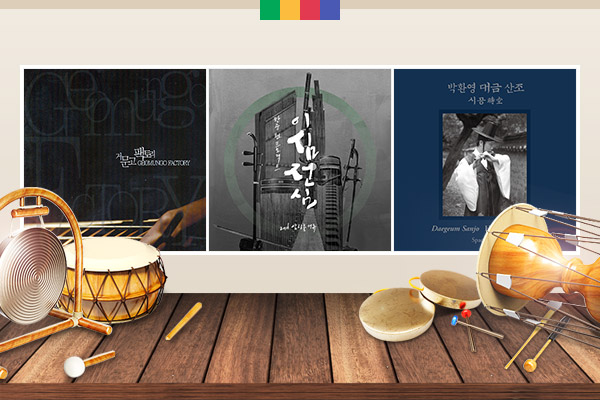 Music is said to influence human emotions. Good music makes you feel good and a horror movie without its eerie music does not scare anyone. In the old days, music was used as an important political tool. If people listened to good music and gained peace of mind, the entire country would be in peace and prosper. It was not surprising, therefore, that musical instruments were regarded as gifts from heaven. In the ancient kingdom of Silla, which existed between 57 B.C. and 935 A.D., musicians were sent to different countries to learn new instruments from musical masters. When Gaya-born Ureuk우륵 sought asylum in Silla with gayageum, King Jinheung진흥 of Silla sent three men to learn the gayageum, Gaya songs and dances from Ureuk. During the Unified Silla period between the late 7th and 10th centuries, Ok Bo-go옥보고 went into Jirisan지리산 Mountain to practice the geomungo, an instrument from the ancient Goguryeo고구려, for 50 years. But only one student by the name of Sok Myeong-deuk속명득 learned Ok Bo-go’s music and later Gwigeum귀금 was the only successor of Sok Myeong-deuk’s melodies. The king worried that the tradition of geomungo would die out, so he appointed Yun Heung윤흥 as the magistrate of Namwon to oversee the preservation of the geomungo culture. Yun Heung then sent two smart musicians to study geomungo music with Gwigeum. But when the geomungo master refused to pass down the secrets to great geomungo music, Yun Heung tried to persuade Gwigeum to teach them music by going down on his knees and offering him wine. Yun’s determination finally moved Gwigeum and the two Silla youths ended up learning all the musical secrets from the master. This week’s Sounds of Korea starts off with a piece titled “Jeongjungdong,” which means movement within stillness performed by Geomungo Factory.

Six most popular instruments in the Unified Silla period were called “samhyeon samjuk삼현삼죽,” which means three string and three bamboo instruments. Samhyeon refers to gayageum, geomungo, and bipa. Among these three, bipa is the least well-known, but this instrument resembles the guitar in its appearance and the way it is played. Bipa has a teardrop-shaped body and a long neck. It is played like a guitar with both hands by fretting or pressing the strings with one hand while plucking the strings with a stick called suldae술대 or strumming them with the fingers. It is assumed that bipa has been around for quite a long time, but its performing technique has not been passed down. It is fortunate, therefore, some musicians found their own ways of playing the instrument in recent years. Since there are several instruments resembling bipa in China, Japan and other Asian nations, some people may think that bipa music sounds like typical Chinese music. Let’s listen to a bipa piece to hear what the instrument really sounds like. Here’s gugak ensemble The Ryu performing “A Mountain Bird Cries.”

Music 2: A Mountain Bird Cries/ Performed by The Ryu

Did you hear how different the bipa sounds compared to the gayageum or geomungo? Bipa tends to make more exotic sounds than other traditional instruments. Let’s move on to “samjuk” or three wind instruments made with bamboo, which refers to daegeum대금, junggeum중금 and sogeum소금. These wind instruments are held sideways, much like the flute, and the name indicates the size with the daegeum being the largest, followed by jungeum and sogeum. The smaller the instrument, the higher the key, so the daegeum makes a low and heavy sound, while the sogeum’s sound is higher and clearer, like a bird call. Unfortunately, junggeum and sogeum were discontinued, but modern gugak musicians modified an instrument named dangjeok당적 to play it like sogeum. But the modern-day sogeum is different from the one from the Unified Silla period in the strictest sense. Daegeum is translated as a Korean flute, but it actually sounds much rougher than the flute. Daegeum virtuoso Park Jong-ki박종기 of the late Joseon era was the creator of daegeum sanjo or daegeum freestyle solo pieces. One of his grandsons is daegeum master Park Hwan-young박환영 who has revived the elder Park’s sanjo pieces. Today we will listen to Park Jong-ki’s daegeum sanjo pieces titled “Jungmori” and “Jajinmori” performed by his grandson, Park Hwan-young.