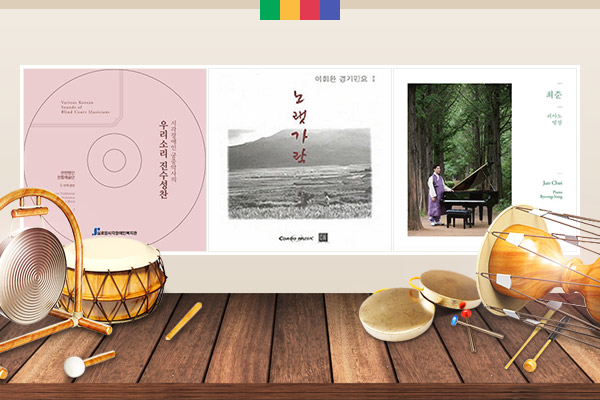 Among the court musicians of the Joseon period were several blind artists, who were called “gwanhyeonmaengin관현맹인.” Scholar and government official Park Yeon박연 who was in charge of music and arts during King Sejong’s reign in the early 15th century wrote an appeal to the king to call for improved treatment of blind court musicians. Park wrote, “Kings of the past put blind musicians in charge of celebrations and entertainment, because they could pay careful attention to sound even without sight and also because no one in this world is worthless.” The hiring of blind court musicians was part of Joseon’s welfare program for the disabled. Such program is available today as well. The Korean Traditional Music Orchestra of the Blind is comprised of professional gugak musicians with visual impairments. The absence of sight seems to have sharpened their auditory senses, resulting in beautifully harmonious music. The first piece we’re going to hear today is a poetic song titled “Gwansanyungma관산융마” sung by Lee Hyun-ah, a member of the Korean Traditional Music Orchestra of the Blind, with Park Ji-sun playing the danso for accompaniment. The song describes the scenic sight of a quiet river and a gentleman feeling the westerly wind while listening to the sound of a flute and watching the gulls fly about.

Lee Hyun-ah was awarded with the grand prize at the 2013 Onnara Gugak Contest over other non-disabled contestants. It wasn’t easy for a blind person to major in Korean traditional music. There were very few musical scores or textbooks in braille, so she studied music by listening to music experts analyzing Korean music on radio. Even after all that hard work, however, she couldn’t apply to music colleges, because no music college at the time admit people with disabilities. But one college heard of her story and allowed blind students to apply for admission and let her compete with other able-bodied peers. Considerations for people with disabilities are still lacking in Korean society, leaving disabled people to deal with many challenges in their everyday lives. Next up is master singer Lee Hee-wan’s rendition of Gyeonggi folksong “Noraegarak” meaning melody. Lee Hee-wan, also blind, was born into a family of gugak musicians and studied music under many different teachers. He must have overcome numerous challenges until he was able to incorporate all his experiences and sentiments in his singing and came to be admired as a master singer. Here’s Lee Hee-wan singing “Noraegarak.”

Today’s last piece is a passage from pansori Heungboga흥보가 sung by Choi Jun with piano accompaniment. Choi was diagnosed with developmental disability when he was only 30 months old. But he was found to be extra sensitive to sound when young and learned to play the piano and sing pansori when he was a mere elementary school student. He learned how to articulate by singing pansori and subsequently became capable of interacting with other people. He combined his two loves – pansori and piano – and created a new genre of piano byeongchang병창, singing pansori with piano accompaniment. He is a true all-around musician who can write music and play his compositions. The passage we’re going to hear soon is the part where the greedy Nolbu visits his now-wealthy brother Heungbo and takes home a hwachojang화초장, a small flower-decorated wardrobe, filled with gold. This week’s Sounds of Korea will conclude with Choi Jun singing the Hwachojang화초장 aria from pansori Heungboga.