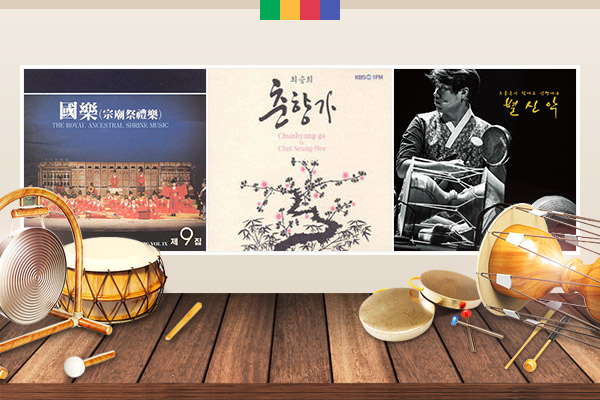 Mankind’s first musical instrument was probably percussion. Primitive tribes living in isolated areas like the Amazons are seen playing mostly percussion instruments. Humans likely started pounding on stones or wood pieces to signal danger or prey when hunting. When people started to understand the world better and develop some semblance of culture, they probably played these percussion instruments to carry their wishes to heaven on the wings of sound. Today’s music pieces feature various percussion instruments and the first one up is “Jeongdaeup정대업” from the Jongmyo종묘 ceremonial music, which was played when holding memorial services for kings and queens of Joseon. There are two kinds of Jongmyo ceremonial music – “Botaepyeong보태평” to mark scholastic achievements and “Jeongdaeup 정대업” to praise military feats. Each one is a collection of 11 smaller movements. Jongmyo ceremony was an important event for the kingdom, so the entire process had to follow a strict protocol. The composition of the ceremonial orchestra was also unique, featuring percussion instruments not often used in ordinary times. During war in the old days, the sound of a drum signaled advance while that of a gong retreat. At the beginning of “Jeongdaeup” a large drum named “jingo진고” was beaten ten times before any other instruments came into play, and it ended with ten repetitions of a gong. In the middle, taepyeongso태평소 was played to ramp up the troops’ morale. We’re going to hear three movements from “Jeongdaeup” performed by the Court Music Orchestra of the National Gugak Center.

When playing the Jongmyo ceremonial music, “Botaepyeong” is played before “Jeongdaeup,” since Joseon was a country that respected scholarly achievements more than military feats. At the beginning of “Botaepyeong” a percussion instrument called “chuk축” played by pounding a mortar inserted into a square box. An instrument called “eo어” shaped like a tiger is played to signal the music’s end. The instrument’s spine has several bumps which are scraped with a bamboo stick to make sound. The chuk is painted blue to represent the east and the eo white to symbolize the west and each instrument is placed in the direction indicated by its color. Now we will listen to a passage from pansori “Chunhyangga춘향가.” Pansori is a unique vocal discipline that usually features only a singer and a drummer. The drummer not only helps keep the beat, but encourages the singer by shouting something called “chu-imsae추임새” now and then between the words. The passage we’re going to hear is where Chunhyang laments parting with Lee Mong-ryong이몽룡. Master singer Choi Seung-hee sings with drummer Kim Myung-hwan keeping the beat.

Today’s last music piece is Byeolsingut별신굿 music. Gut is a shamanistic ritual in which gods are invited to grant people’s wishes and be entertained. To please the gods, the ritual must be carried out with sincerity and must accompany great music and dance. Musicians for shaman rituals are often from a family of shamans, so they tend to be artistically inclined and have much experience in shaman music. Gut music from the East Coast of Korea is marked by its use of percussion instruments. Today we are going to listen to Byeolsingut music titled “Cheongbo,” which means a plea to the gods. Sharp sound of a kkwaenggwari꽹과리 or a Korean gong and the powerful sound of a double-sided drum janggu장구 are blended to create an energetic vibe. Here’s Seo Han-na singing “Cheongbo” from Byeolsingut accompanied by Jo Jong-hun and others.