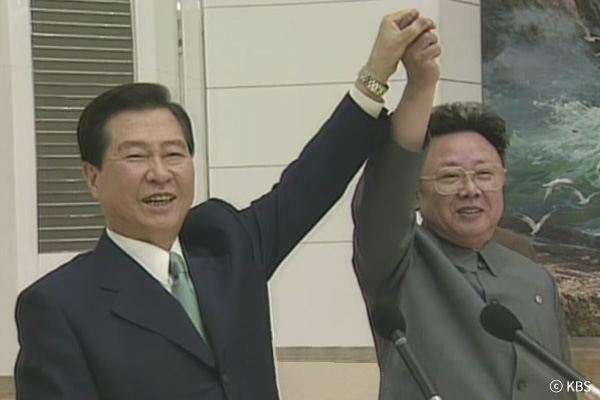 The leaders of South and North Korea finally met for the first time in 55 years since the division of Korea on June 13, 2000, in Pyongyang. No doubt, the first-ever inter-Korean summit set a new milestone in South-North relations. Then-South Korean President Kim Dae-jung and his North Korean counterpart Kim Jong-il discussed various issues for three days to produce a historic agreement. Today, we’ll hear from Park Jie-won, then-South Korean special envoy for the inter-Korean summit, recalling how the summit adopted the June 15 South-North Joint Declaration in 2000.

On June 13, 2000, Sunan Airport in Pyongyang was ready for a very special welcoming event. North Korean leader Kim Jong-il came to the airport himself to greet the South Korean president, who reviewed the North’s honor guard, a diplomatic protocol provided to foreign leaders making a state visit. The inspection of the honor guard showed that South and North Korea defined their ties as special relations and also implied that North Korea’s attitude was changing. Here’s Mr. Park to explain.

It was pretty impressive to see President Kim Dae-jung being saluted by North Korean soldiers and inspecting the honor guard. When President Kim was about to get in the car, something unexpected happened. The North Korean leader suddenly suggested that the South Korean first lady use another car and he ride in the limousine instead, with President Kim. So the two leaders arrived together at the guesthouse in the same limousine. There, the North Korean leader said jokingly, “Mr. President, where do you think you are?” He also said he would come to this place again the following morning to hold talks. Upon hearing that, I shed tears again, thinking that the summit would certainly take place.

When North Korean leader Kim Jong-il announced that he would participate in the inter-Korean summit at the Baekhwawon Guesthouse on June 14, Mr. Park was moved to tears. Earlier, on April 8, he and North Korean special envoy Song Ho- gyong simply agreed that the South and the North would hold a historic meeting. There was speculation that the summit might be held between the South Korean president and Kim Yong-nam, president of the Presidium of the Supreme People’s Assembly in the North. But the North Korean leader’s announcement dispelled worries about who would attend the summit from the North Korean side. Mr. Park says that there was still another obstacle.

North Korea kept insisting that the South Korean president visit Kumsusan Palace of the Sun to pay tribute to the North’s late founder Kim Il-sung. That night, I met North Korean special envoy Song Ho-gyong at 9 p.m. and wrangled over the tribute thing until nearly 1 a.m. Song said that all foreign envoys and leaders visiting North Korea laid a wreath at the memorial hall, just as the South Korean president would visit Arlington National Cemetery when he traveled to the U.S. But I said no, never, telling him that it would be a big problem in South Korea. I even said that I, not the president, would visit the memorial hall as a special envoy, resign later and end up in prison in South Korea. Both of us refused to budge an inch, and the talks fell through. But for some reason, I got a good feeling about this matter. When I returned to the guesthouse, the president, the first lady and National Intelligence Service chief Lim Dong-won were still awake, waiting for me nervously. I wanted the president to feel easy and sleep well, so I said to him, “Don’t worry. Everything will be fine.” I spoke boldly, but I couldn’t sleep. The next morning, a North Korean official told me that top officials were impressed by my enthusiasm and it would be OK for the South Korean delegation to skip the ritual this time. So, the problem was resolved.

Fortunately, the two sides managed to settle this controversial issue. On June 14, the two leaders met for a second time, smiling brightly. After having a pleasant conversation about their first encounter at the airport, the two men began to hold summit talks at 3 in the afternoon. The summit, including dinner, lasted until 6:50 p.m. and the two leaders signed a joint declaration at 11:20 p.m.

The historic June 15 South-North Joint Declaration showed a new path for inter-Korean reconciliation and cooperation, moving beyond the wall of national division. In the declaration, South and North Korea agreed to solve the question of reunification independently, exchange visiting groups of separated families, promote the balanced development of the national economy through economic cooperation and hold dialogue between the authorities to implement these agreements. The most attention-grabbing part of the declaration was the two sides’ recognition that their unification formulas share something in common. Induced by President Kim at the summit, North Korean leader Kim Jong-il offered a loose form of federation. In the process, the two leaders showed each other their deep trust. And they finally signed the June 15 Joint Declaration that would become the foundation of reconciliation, cooperation and unification. They promised to meet again during the farewell lunch on June 15 and moved to the airport, where they embraced each other passionately. President Kim boarded the plane at 4:15 p.m. and returned to Seoul. The president briefed the South Korean public on his three-day North Korea visit, with an encouraging message that South Koreans, too, might welcome a new day. Unfortunately, it wasn’t easy to fulfill the dream of a new hopeful era. Mr. Park shares his opinion about the 2000 summit and unification.

Low-level federation would have been a shortcut to unification. Some conservatives in South Korea suspect that it is none other than North Korea’s unification formula for “Koryo Federal Republic.” But that’s not true. Rather, federation of lower stage calls for the two Koreas to speak with one voice in diplomatic affairs, while recognizing each other, just as they do right now, and exercising their respective rights over regional affairs. If the formula had been put into practice, it would have been great. During the 2000 summit, Kim Dae-jung said that unification might come about in 30 years if the South and the North promote exchanges and live peacefully without war. But Kim Jong-il said that would be too early, and he predicted that it would take 50 years at least. If things had gone well, and if Kim Dae-jung was right, there would be 12 years left now before we achieve unification. If Kim Jong-il’s prediction was accurate, Korea would be unified in 32 years. But the unification process has regressed, due to the lost ten years of inter-Korean relations.

The 2000 inter-Korean summit provided momentum to facilitate the reunions of separated families. It also led to other positive results, including the restoration of severed cross-border railroads and the agreement on the Gaeseong Industrial Complex. However, the second North Korean nuclear crisis erupted in October 2002, plunging inter-Korean relations into a state of extreme tension yet again. This year, Seoul and Pyongyang have been paving the way for peace again through the third inter-Korean summit. Mr. Park says that the beginning of the peace-making efforts was the June 15 Joint Declaration in 2000.

The June 15 Joint Declaration was not a unification policy but a policy for engagement with North Korea. It pursues cooperation, exchanges and peace, while preventing war. This year, the Panmunjom Declaration was adopted at the third inter-Korean summit on April 27 and the North Korea-U.S. summit took place on June 12 to promote peace on the Korean Peninsula. But I’d say that the seed of peace was first planted at the 2000 inter-Korean summit, and that seed is growing and flowering now.