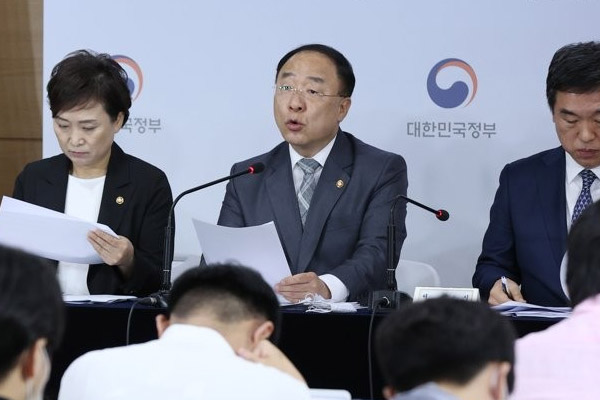 In the fight to contain skyrocketing housing prices in Seoul and the greater capital area, the government will build a total of more than 130-thousand homes in the region. Deputy Prime Minister Hong Nam-ki held a joint news conference on Tuesday with the land minister and acting Seoul mayor to announce the supply plan as ruling party lawmakers strengthened punitive tax measures against multiple home owners in a demand control measure.

Home prices in Seoul have risen nearly 35 percent over the last three years, becoming an Achilles heel for the progressive government.

"First, we will find new parcels of land for home construction to provide 30-thousand housing units in key areas. The government will maximally utilize military facilities and state-owned land, as well as locations of public agencies and unoccupied areas in Seoul to secure valuable land for homes."

This includes Taeneung golf club in northeastern Seoul as well as Camp Kim, a military base in central Seoul that U.S. Forces Korea is returning to South Korea.

While providing a total of 132-thousand additional homes in Seoul and its surrounding areas, the latest measures also call for increasing the residential density of high-rise homes to push the maximum floor allowance to 50.

The housing supply plan complements the demand control measures the government has focused on, including strict mortgage loan regulations as well as punitive taxes against multiple home owners.

Speaker Park Byeong-seug: "Of 188 taking part in the vote, the partial revision to the Comprehensive Real Estate Holding Tax law passed with 186 voting for, one against and one abstention."

The ruling Democratic Party on Tuesday revised the nation’s property tax laws, raising the maximum Comprehensive Real Estate Holding Tax for multiple home owners from three-point-two percent to six percent. The main opposition United Future Party(UFP) did not take part in the vote, which the ruling party was bound to win with its 176 seats in the 300 member parliament.

Minor opposition Justice Party chief Sim Sang-jung argued that the supply plan will only boost home prices, saying the government has a fire extinguisher in one hand and a fuel tank in the other.

The deputy prime minister said the government will make sure that the housing development plan will not lead to a sudden spike in real estate prices in related areas.