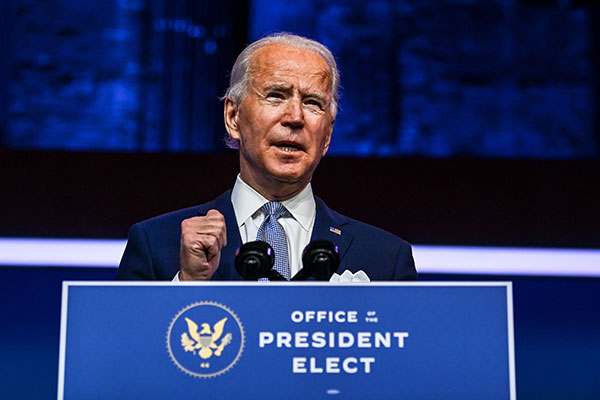 During a speech Tuesday in Delaware, U.S. President-elect Joe Biden introduced his foreign affairs and national security team, which he says will embody his belief that America is strongest when it works with its allies.

"It's a team that reflects the fact that America is back, ready to lead the world, not retreat from it. Once again, sit at the head of the table ready to confront our adversaries and not reject our allies, ready to stand up for our values."

Standing next to Biden, Tony Blinken signaled a return to global partnership.

"Humility, because as the president elect said, we can't solve all the world's problems alone. We need to be working with other countries. We need their cooperation. We need their partnership, But also confidence... "

On the North Korea front, U.S. President Donald Trump's one-on-one diplomacy with North Korean leader Kim Jong-un hit a stalemate after the collapse of the Hanoi summit in 2019.

In an interview with KBS World Radio, Rep. Ami Bera, who oversees Asia and Nonproliferation issues on the U.S. House Foreign Affairs Committee, predicted that the Biden administration and Seoul will restart by forging interim steps for denuclearization.

[Rep. Ami Bera - Chairman, Chairman of the Subcommittee on Asia, the Pacific, and Nonproliferation]

"... the next step is to try and get a dialogue going again. And that could begin by President-elect Biden, or by that time President Biden, announcing a special envoy to approach North Korea to start a dialogue and think about what are the next steps to potentially get to the table. And again, when I think about the team that President-elect Biden is putting around him - Tony Blinken and others, Jake Sullivan - this is a very experienced foreign policy, national security team. So, I do think there'll be dialogue starting with the South Koreans and certainly one of President-elect Biden's first phone calls was to President Moon Jae-in. So, I think that speaks to the importance of the relationship."

Rep. Bera warned North Korea not to stage anything provocative during the transition period, so the Biden administration can pick up from vague agreements that Trump and Kim reached at the Singapore summit back in 2018.