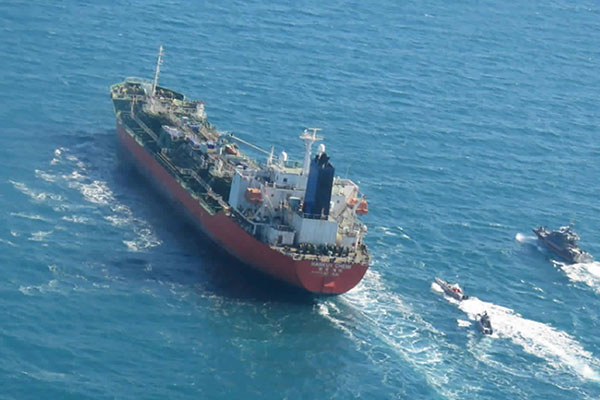 As Iranian state media aired aerial footage of the vessel shortly after the seizure, a representative of the ship's operator told KBS that Iranian helicopters and vessels approached the tanker while en route to the United Arab Emirates from Saudi Arabia.

"Through the Very High Frequency(VHF) Marine Radio, the Iranian military contacted the vessel and told it to proceed slowly for a moment as there was something to investigate. When the soldiers came onboard the ship, they suddenly said the vessel had to be taken to Iranian territory for a thorough investigation. When our captain asked why they had to be taken from international waters, the military did not give a detailed response."

A statement issued by the Revolutionary Guard was broadcast by Iranian media outlets, confirming the vessel's seizure at around 10:00 a.m. local time, after which the ship and its crew were taken to the Iranian port of Bandar Abbas.

"The seizure of a South Korean-flagged oil tanker in Persian Gulf waters was due to violation of environmental guidelines. This tanker has been directed to one of the Iranian ports for its violations to be investigated. The tanker was carrying seven-thousand-200 tons of ethanol departing from Saudi Arabia bound for South Korea."

An aerial shot filmed from a helicopter was released showing the South Korean tanker being transferred to Bandar Abbas.

The representative of the seized tanker, however, denied there was any violation of territorial waters or maritime pollution.

"From the beginning, we said there was no violation of territorial waters. We were on open waters. We also heard that Iran is playing the media, claiming there was marine pollution. We can not accept such claims since the vessel went through a weeklong regular inspection three month ago, and that equipment was installed to remove microorganisms before it set sail."

Experts say that the timing of the incident should be considered, coming amid rising Washington-Tehran tensions with Iran announcing it had increased its uranium enrichment levels to 20 percent.

It also comes just two weeks ahead of the January 20 inauguration of U.S. President-elect Joe Biden, who has vowed to revive the Iran nuclear deal.

Experts also speculate that Tehran, which is in dire need of foreign currency amid U.S. sanctions, may be signaling Seoul, a U.S. ally, to persuade Washington to allow the Iranians access to seven billion dollars of frozen oil money at two South Korean banks.

A government delegation arrived in Iran on Thursday to negotiate the early release of the oil tanker and its crew.

According to Iran's state-run IRNA news agency, Saeed Khatibzadeh, a spokesperson of the Iranian Foreign Ministry, said on Thursday in a press briefing that the South Korean delegation had arrived in Tehran.

However, the spokesperson gave a different reason for the visit, saying that it had been agreed upon before the seizure and its main goal was to discuss ways to access Iranian funds frozen in South Korea.

Koh Kyung-sok, the head of the delegation, told reporters before departing for Iran that he plans to meet with his counterpart at the Iranian foreign ministry, and will meet others through various channels if that will help efforts to address the seizure.