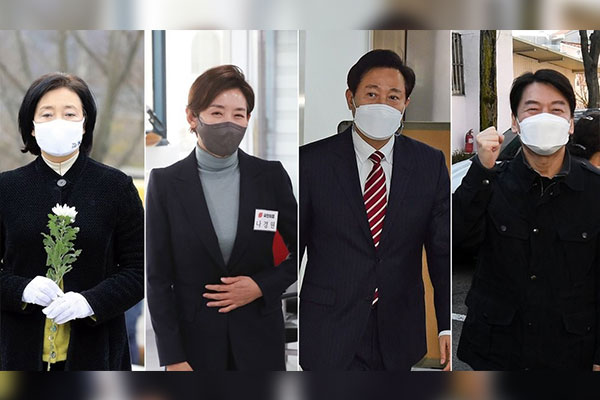 The primaries for April's mayoral by-elections in Seoul and Busan are nearing an end. The ruling Democratic Party is expected to name its candidate for Seoul on Monday with Busan to follow as early as next Saturday. On the other side, the main opposition People Power Party is set to announce its final candidates for both races next Thursday.

The ruling Democratic Party(DP) on Friday opened voting in the primary to choose its candidate for the April 7 Seoul mayoral by-election.

The vote, which lasts until 4:00 p.m. Monday, will combine ballots from party members holding voting rights and general voters, with each group taking up 50 percent.

In the southeastern port city of Busan, three potential candidates are in the ruling party's primary race, where voting will take place from March 3 to 6. If the candidate with the highest number of votes fails to secure a majority, a run-off will follow from March 11 to 14.

Over at the main opposition People Power Party(PPP), four candidates who have put their name in the hat for the Seoul race are scheduled for two final group debates on Friday and Monday.

While four debates among four candidates in Busan were finished as of Thursday, a public survey of the candidates in both cities will take place from Tuesday to Wednesday, before the final candidates are announced on Thursday.