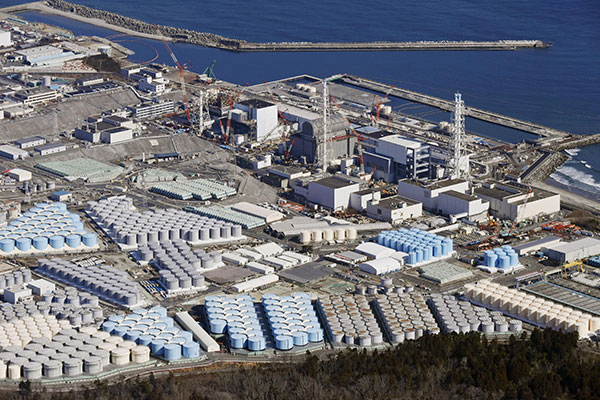 Following years of debate, Japan announced earlier this week that it will release radioactive water from the crippled Fukushima nuclear power plant into the ocean. In a bid to appease growing concerns over its adverse health and environmental effects, Tokyo said it would take precautions and meet international standards. But neighboring countries, including South Korea, expressed concern, calling the decision “unacceptable.”

Japan has announced that it will release treated but still radioactive water from the now-defunct Fukushima nuclear plant into the Pacific Ocean in about two years.

In a news conference on Tuesday, Japanese Prime Minister Yoshihide Suga introduced the planned discharge that will take place over the span of two to three decades.

"How to take care of the treated water is an unavoidable obstacle in the process of the decommissioning of the Fukushima Daiichi nuclear power plant. We will make sure to secure the safety level way over the benchmark... "

A massive earthquake and 15-meter tsunami in 2011 led to the meltdown of reactors at the power plant in Fukushima Prefecture, requiring the Japanese government to inject water to cool off the cores.

A total of more than one-point-25 million tons of that water is now stored in tanks at the plant. Reaching over 91 percent of the storage capacity, the amount is enough to fill the Tokyo Dome baseball stadium.

Under the plan, the Advanced Liquid Processing System(ALPS) will treat the contaminated water, eventually removing most of the radioactive materials except for tritium.

"We will decrease the tritium concentration level to about one-fortieth of the benchmark set by Japan and one-seventh of the benchmark for drinkable water set by the WHO. Furthermore, we will maintain transparency with the eyes of third parties such as IAEA and continue monitoring closely."

Despite its claims, the move sparked protests in Japan, as well as South Korea, China and other neighboring countries.

Speaking to the Japanese ambassador to Seoul a day after the announcement, President Moon Jae-in delivered the country’s rising concerns, asking the envoy to inform his government of the public sentiment in South Korea.

Moon asked his officials to consider ways to resolve the issue at the International Tribunal for the Law of the Sea, including filing for a temporary injunction, which would block the release until the court’s decision on the matter is finalized.

While neighboring countries and hundreds of civic groups expressed concerns, the International Atomic Energy Agency(IAEA) expressed support for the planned release, saying nuclear plants around the world use a similar process.

South Korea is seeking to add its own experts to the team of inspectors from the International Atomic Energy Agency(IAEA) who will make sure that Japan follows safety procedures in releasing radioactive water from the Fukushima nuclear power plant into the ocean.

A senior Foreign Ministry official said Thursday that Seoul has made the request to the IAEA and the nuclear watchdog views it positively.

However the dispatch of the IAEA team will be carried out at Japan's request and Tokyo may object to South Korea's participation.