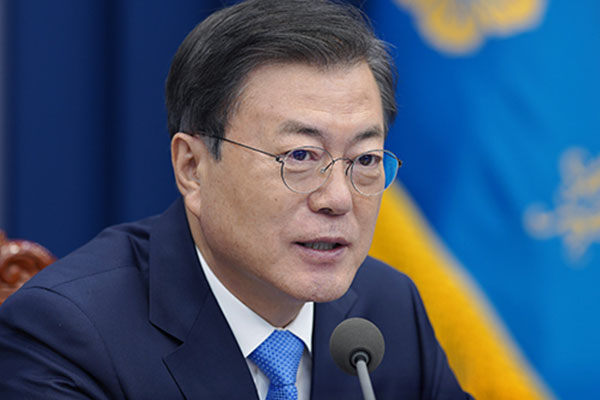 South Korean President Moon Jae-in said Thursday that his country will provide a more rigorous target for reducing carbon emissions. In a climate summit hosted by U.S. President Joe Biden, the South Korean president also promised that his government will no longer finance the construction of coal power plants overseas. However, some of the world’s biggest emitters are still reluctant to join Biden’s climate initiative.

Moon made the announcement on Thursday during a virtual climate summit of 40 world leaders hosted by U.S. President Joe Biden.

"The Republic of Korea will further raise our nationally determined contribution for 2030 and submit it to the United Nations within this year. Last year, we replaced our previous reduction target based on BAU, with an absolute target of cutting 24 percent from the 2017 emissions level, making it our first upward adjustment. Now we have strong aspiration to reach net zero emissions by 2050."

Despite efforts to cut greenhouse gas emissions, Seoul has faced criticism for its continued investment in coal power plants overseas.

"Korea will end all public financing for overseas coal fired power plants. Since the launch of my government, Korea has stopped issuing permits for building new domestic coal power plants, shut down ten aged units earlier than scheduled, and as a result drastically reduced its reliance on coal for power generation. Instead we are swiftly ramping up production of renewable energy such as solar and wind power. To become carbon neutral, it is imperative for the world to scale down coal fired power plants."

Reversing his predecessor’s environmental policy, Biden at the virtual summit promised to cut U.S. fossil fuel emissions up to 52 percent by 2030 and derived support from allies like Japan, which promised a 46 percent cut.

"You know, these steps will set America on a path of net zero emissions economy by no later than 2050, but the truth is, America represents less than 15 percent of the world's emissions. No nation can solve this crisis on our own, as I know you all fully understand."

However, the leaders of India and China remained reluctant to join Biden's initiative and did not make new commitments.

"The principle of common but differentiated responsibilities is the cornerstone of global climate governance. We need to give full recognition to developing countries' contribution to climate action and accommodate their particular difficulties and concerns. Developed countries need to increase climate ambition and action to help developing countries accelerate the transition to green and low-carbon development."

The virtual meeting is a key juncture ahead of the 26th UN Climate Change Conference in November.