Pres. Yoon Vows to Get to the Heart of Itaewon Crowd Crush 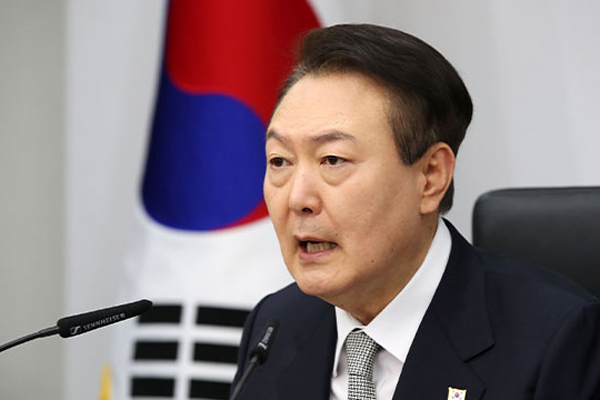 Anchor: President Yoon Suk Yeol has vowed to get to the bottom of what went wrong in the authorities' response to the Itaewon crowd crush and hold to account those responsible based on the findings. The president specifically emphasized the need to overhaul the police force.

Report: President Yoon Suk Yeol pledged on Monday to determine responsibility for the deficient handling of the Itaewon crowd surge when he chaired a meeting of senior government officials on the national safety system.

His remarks appeared to be directed at Police Commissioner General Yoon Hee-keun and interior and safety minister Lee Sang-min, who were among those present at Monday's meeting.

"I will exert efforts to thoroughly reveal the truth of the Itaewon crush and have all findings disclosed transparently, without doubt, to the public. Based on those findings, I will have those responsible sternly held to account."

"Fellow South Koreans, the government will do its best to make South Korea safe by thoroughly getting to the bottom of the incident and actively revamping the safety management system. I will see to it that the government works to help the public get back to their everyday lives."

"I will take ownership and take care of it myself. I ask you to come together as we overcome the pain and hurt."

In particular, the president stressed the need for a large-scale reform of law enforcement, noting that the police had failed to promptly respond to the crush despite early signs of danger.

"To better respond to various dangers in our society, there is a need for an overall institutional review of the authority and responsibility of nation's safety management system and the system for swiftly reporting incidents. In particular, a massive overhaul is needed of police duties focused on the prevention of accidents and emergency preparations to protect the public."

During the meeting, participants discussed ways to improve the nation's rules and institutions on disasters and safety accidents and addressed old structural problems, including passive response measures strictly based on manuals.

Yoon stressed the need for various safety management systems to handle crowds based on their form and location, noting that large crowds are a dangerous situation that people can face in their everyday lives.

At the start of Monday's meeting, Yoon again expressed his condolences and apologized to the bereaved families of the victims who suffered from an unspeakable tragedy.

A trio of opposition parties have requested a parliamentary investigation into the cause of the Itaewon crowd crush.

The main opposition Democratic Party(DP), the Justice Party and the Basic Income Party were joined by a group of independent lawmakers that had defected from the DP in submitting the request Wednesday afternoon. A total of 181 lawmakers, accounting for slightly over 60 percent of the unicameral parliament, joined the move.

The DP has criticized the National Police Agency for leading the investigation into the agency’s response to the crush widely considered deficient.

The ruling People Power Party(PPP), for its part, opposes the parliamentary probe at this time, saying priority should be given to the outcome of the police investigation.