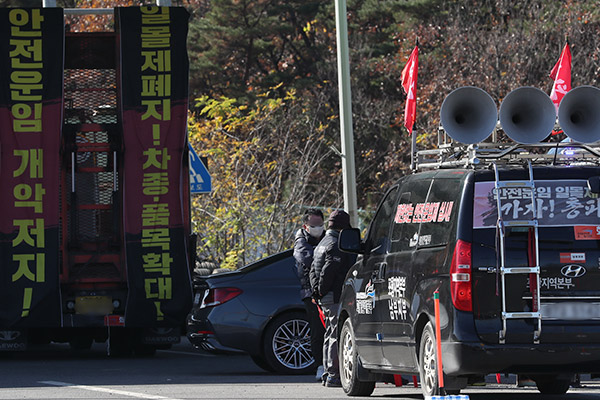 Truckers across the nation began a general strike, hampering freight deliveries across the country as they demand the government extend and expand a system guaranteeing minimum shipping rates.

The government issued a stern response and threatened to take executive action against the protesters if the strike severely compromises nationwide logistics.

The 16 regional branches of the Cargo Truckers Solidarity union under the Korean Confederation of Trade Unions launched a general strike Thursday morning, staging protests at ports and industrial complexes across the nation.

"The government has again pushed the truckers to another general strike following the previous walkout in June. If we cannot avoid a strike, we are going to fight!"

After the walkouts began at 10 a.m. the truckers began blocking the entry and exit of cargo from shipping facilities nationwide.

"Nearly 700 citizens die in truck-related car accidents in a year. Truckers work 12 hours a day throughout the month and sometimes work 16 hours a day to make a living. We can no longer fuel trucks with their deaths and pain. The Safe Trucking Freight Rates System is the only legal protection."

The union is demanding that the government extend the Safe Trucking Freight Rates System that is set to expire at the end of the year. The system was originally implemented with the intention of guaranteeing a minimum shipping rate for truckers and thus mitigating exhaustion or overloading.

The truckers are demanding that the government expand the policy to cover other types of cargo such as steel, automobiles and loads in tankers. Only container and cement trucks, or just over six percent of all commercial freight vehicles, currently benefit from the system.

The ruling People Power Party proposed a three-year extension of the system on Tuesday but rejected expanding the coverage, with Transport Minister Won Hee-ryong arguing that the system has not been proven to increase safety but only increased drivers' incomes.

Responding strongly to the collective action, Won said that the government will have no choice but to respond sternly in accordance with the law to an indefinite general strike that cripples the country’s logistics.

Won added that the effects of a protracted standoff on the nation’s shipping network may compel the government to invoke an executive order ending the protest, stressing that the government made no promises about extending or expanding the system.

The government responded by setting up an emergency transportation headquarters and deploying official and military vehicles to prevent possible supply disruptions. It has also dispatched police at major logistics hubs to monitor illegal blockades of transportation.