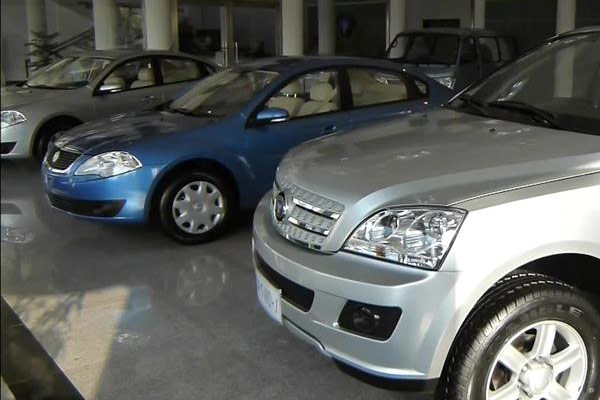 How many cars are running on the roads in South Korea? It is said that one out of two South Koreans have a car. As of the end of June 2019, the number of registered motor vehicles in South Korea totaled 23,444,165, or one automobile per 2.2 people. Only 50 years ago, South Korea dreamed of an era of owning a car. But the number of cars per household surpassed 1 for the first time in 2012, indicating that the domestic automobile industry has grown extensively.

North Korea began to produce cars in 1958, earlier than South Korea’s Hyundai Motor’s establishment in the 1960s. For ten years after the Korean War, North Korea outpaced South Korea in terms of the volume of vehicles. According to the data of the Unification Ministry in Seoul, North Korea produced about 4,000 cars in 1965.

Around that time, South Korea manufactured a mere 100 cars. Indeed, there was a wide gap between the two sides in auto production. However, South Korea made 4.23 million vehicles in 2016 as one of the world’s largest auto producers. In contrast, North Korea’s annual auto production remained at 4,000—the same level as 50 years ago.

As of 2018, North Korea had five vehicle manufacturers—Pyeonghwa Motors, Sungri Motor Plant, Pyongyang Auto Works, Chongjin Bus Works and Kim Jong Tae Locomotive Works. Among them, the most well known is Pyeonghwa Motors, the nation’s only standard car manufacturer. Most of passenger cars running on the roads in the North are made by this auto company. Other makers mostly import partly-manufactured products from China for final assembly in North Korea.

“Pyeonghwa” means “peace.” With its logo featuring two flying doves, Pyeonghwa Motors is the sole North Korean automaker that directly produces and sells cars. It was founded in 1999 as a joint venture with South Korea. On the back of brisk exchanges between South and North Korea, its factory was completed in Nampo in 2002 to begin production. Auto production increased considerably from a mere 100 in 2002 to nearly 2,000 in 2011. Pyeonghwa Motors of South Korea had a 70 percent stake in the factory, while the remainder was owned by the Korea Ryonbong(련봉) General Corporation controlled by the North Korean government. But the stake held by South Korea has been sold to China.

Vehicle models produced in the factory include a compact sedan called “Hwiparam(휘파람),” meaning “whistle.” There is a famous North Korean song with the same name. The car was produced after the factory was completed in 2002. The auto firm promotes this model actively, as its name was given by then-leader Kim Jong-il. The 5-seat sedan with a 1.5-liter engine and a 5-speed manual transmission has up to 103 horse power. Another model called “Junma(준마),” meaning “swift horse,” is a higher-grade sedan than Hwiparam. It is a rebadged version of the luxury sedan of “Chairman” produced by South Korean automaker Ssangyong. A sports utility vehicle model called Ppeokkugi(뻐꾸기), or “Cuckoo” in English, is produced in the factory under license with Chinese carmaker, Liaoning Shuguang. Ppeokkugi II is based on an old SUV model of Liaoning Shuguang, while the latest Ppeokkugi III is built from the Huanghai model design.

Although the North Korean auto company produces various models, most local residents are unable to afford to have a car. North Korea prohibited individuals from registering vehicles until 2017. While relevant regulations were eased from early 2017, prices of cars and maintenance fees are so expensive that only 20 percent of citizens of Pyongyang, where the income level is relatively high, own a car.

A Ppeokkugi SUV model, for example, cost 3.4 million North Korean won in 2015. Considering the average monthly salary for a North Korean worker is 3,000 won, it is simply unimaginable how much money they have to save to purchase a car. The 3.4 million won is based on the official ratio of 100 North Korea won per dollar. But considering that 1 US dollar is traded at 8,000 won in the black market, the SUV is about 30-thousand dollars. One foreigner who visited North Korea in 2015 said that a passenger car shaped like a jeep cost about 10-thousand US dollars. On top of prices, if one actually owns a car, there are maintenance costs. Considering North Koreans’ household income, buying and maintaining a car places quite a burden on most families.

Photos show that the leader uses the Mercedes-Benz S-Class when traveling short distances. For a long-distance travel or inspection tours of local provinces, he is known to use the Mercedes-Benz G-Class, which is a large luxury SUV. Some say that Kim is a huge fan of Audi. A few years ago, North Korea’s list of imported vehicles included Audi’s sport car the R8, which is around 250-thousand US dollars. It is said that Kim owns models from many famous luxury foreign brands, including Land Rover’s Range Rover and Lamborghini. There is a wide gap between the car models adored by the leader and vehicles produced by North Korean auto factories including Pyeonghwa Motors.

North Korea advertises vehicles on TV commercials. Phone numbers appear on the commercials, so those who are interested can ask about the models and purchase them over the phone. This is similar in how South Koreans order products on TV home shopping channels.

North Korea’s automobile industry has not grown much, as the nation has placed top priority on the military industry. However, demand for cars has sharply increased in recent years, in line with leader Kim Jong-un’s five-year economic development plan. We’re looking forward to seeing vehicles of Pyeonghwa Motors all across the Korean Peninsula in a unified Korea.