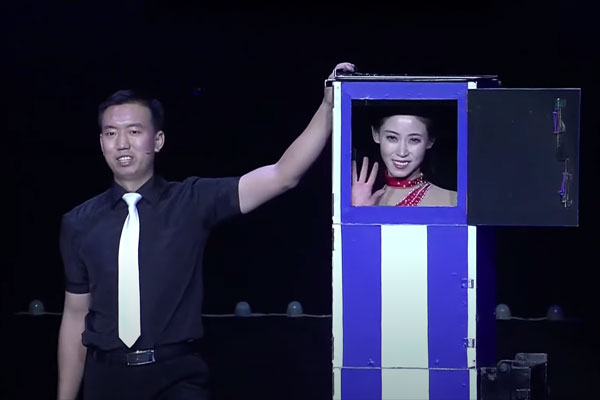 I remember I was totally fascinated by a magic show in North Korea. The show was so marvelous and mysterious that it kept me on the edge of my seat. In the North, magic training institutes have appeared lately for ordinary citizens. Citizens would simply watch magic shows in the past, but some of them now participate in a national magic competition.

It is said that magic shows are very popular in North Korea. They are introduced in TV programs and the local magic industry is given state-level support. Today, we’ll learn about North Korea’s magic industry from Professor Jeong Eun Chan at the National Institute for Unification Education.

North Korea began to perform well in international magic competitions in the early 1970s, when a North Korean magician became a first Asian to win an award at an international magic event. In the early 1970s, North Korea actively promoted the personality cult of then-leader Kim Il-sung and solidified a one-man leadership system. At the time, his son Kim Jong-il was decided as the heir apparent for the leadership. He oversaw the art and cultural scene overall, including magic. It seems he placed great emphasis on high-level technical skills and fantastic elements of magic. After taking power, he actually instructed officials to adopt the most advanced skills in the magic industry. Under his instruction, 3D images were introduced in magic shows, which became modernized.

North Korea established the Magicians Association of Korea in 2001 and set up an exclusive theater the following year. Thanks to government support, the local magic industry has developed significantly. Magic events have grown in size, creating a fantastic mood using scientific technology and presenting unconventional shows.

North Korea has highly promoted the large-scale magic performance that was held at Pyongyang’s May Day Stadium in 2011. The audiences were very excited to see stunning magic tricks, like a passenger bus and a helicopter disappearing in an instant.

The state fully supports magic performances. That’s because North Korea seeks to maintain the regime through magic, promote its art and cultural industries inside and outside the country and achieve internal unity. Also, magic shows are a cultural outlet for the people, allowing them to pursue diversity in their cultural lives.

In North Korea, a magic show is considered to be part of the circus, which is known as performance art or “Kyoye.” Kyoye includes magic shows, acrobatics, animal acts and comedy acts. North Korean circus shows started with the creation of the National Circus in 1952 in the middle of the Korean War. Later, its name changed to the Pyongyang Circus. Now, the Pyongyang Circus and the Korean People’s Army Circus present regular shows at their own theaters every year.

North Korea defines circus performances as one of the nation’s important cultural arts and highly values them, just like other communist states. North Korean acrobatic feats, in particular, are definitely outstanding. Flying trapeze artists, for example, perform amazing tricks in the air. In some scenes, they display techniques with high level of difficulty such as triple somersault or quadruple somersault 15 meters above the ground. Viewers are thrilled to see the dazzling stunts. Riding a bicycle on a tightrope is another popular acrobatic performance. Some performances feature Korean traditional games such as neolttwigi(널뛰기), a game similar to a see-saw. Performers jump 4 meters high on the spring board. In a word, North Korean circus shows are quite spectacular.

In the North, many people hope to become circus performers or “Kyoye artists” because of the great popularity of circus shows. Talented children are selected through a rigorous screening process and go through hard training at specialized institutions including Pyongyang Circus School. Fully supported by the authorities, North Korean circus players have won awards at international competitions to gain recognition. As a result, North Korean circus shows are actively used as one of tour programs.

In fact, North Korean circus performances typically contain ideological elements, which are not expressed outwardly. Foreigners only see the eye-catching and fantastic techniques of the performers.

Many foreigners who have visited North Korea say they were impressed by circus shows and they believe that tourists to North Korea must see them. But the shows can be understood from different angles, depending on viewers. As a North Korean defector, I can read what each act means in the shows.

Among North Korea’s “Kyoye,” magic shows are especially popular. It is little wonder many hope to become illusionists. Interestingly, a North Korea family has held the post of magician for three generations. Kim Thaek-song is a senior magician who served as the lecturer at Pyongyang Circus School. His two sons, Kim Chol and Kim Gwang-chol, have also worked as magicians. Kim Gwang-chol drew attention during the 2018 inter-Korean summit in the truce village of Panmunjom by presenting a magic show there. The two grandchildren, Kim Ju-song and Kim Gwang-song, are also magicians who have stepped into the spotlight through their unconventional use of space.

Kim Thaek-song made a great contribution to the remarkable development of the North Korean magic industry in the 1970s. He won the Kim Il-sung Award, the highest prize in literature and art, and received the honorary titles of “People’s Artist” and “Hard Work Hero.” He became famous overseas as well after he showed impressive performances in magic festivals in Karlovy Vary in the Czech Republic and in Vienna, Austria. His two sons presented more creative magical skills, while his two grandsons have introduced modern techniques in the local magic scene.

These days, North Korean illusionists perform magic wherever people gather round as well as at theaters. Also, forms of magic shows have diversified. Experts believe that magic shows have greater growth potential in North Korea, compared to other genres of performance art.

Current leader Kim Jong-un has shown keen interest in the development of the cultural industry as well as science and technology. As part of efforts to follow global trends in the cultural area, the young leader is expected to develop the magic industry. I think magic is the probably the best tool for the country to promote its cultural achievement the world over. Also, North Korea could use magic shows as a means of earning foreign currency.

During the summit between South Korean President Moon Jae-in and North Korean leader Kim Jong-un in Pyongyang in 2018, South Korean magician Choi Hyun-woo performed a magic show under the theme of telepathy. At the time, the two leaders guessed each other’s minds pretty well.

At present, it is difficult to predict how inter-Korean relations may evolve. We hope that the two Koreas will be telepathic with each other, like magic, to find a way to achieve harmony.