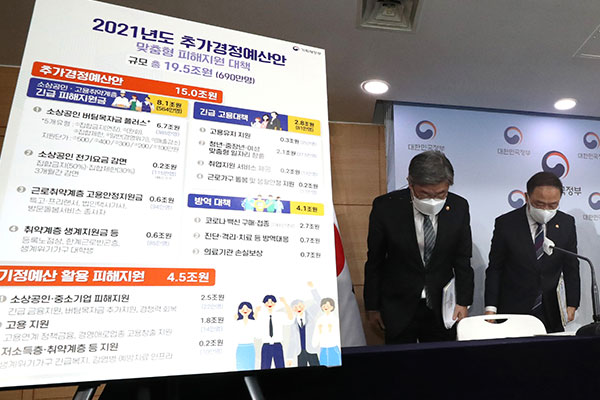 The South Korean government has drawn up an extra budget plan of around 15 trillion won, or more than 13 billion dollars, to lend a helping hand to some six-point-nine million people. Combined with the previously earmarked four-point-five trillion won, a total of 19-point-five trillion won will be injected into struggling small businesses and others who have suffered from the protracted COVID-19 pandemic.

Presided over by President Moon Jae-in, a 19-point-five trillion won disaster relief fund was approved at the Cabinet meeting Tuesday.

Up to five million won, or nearly four-thousand-500 dollars, will be provided to each of the six-point-nine million odd small business owners and others hit hard by the pandemic.

"The vaccination program has begun and exports continue to show good numbers. However, the prolonged COVID-19 outbreak and the extension of quarantine measures have added difficulties to public livelihood and employment. After consulting with the ruling party, the administration has drafted a 19-point-five trillion won disaster relief fund."

"The current disaster relief is the largest in scale among the four relief packages, and we focused on providing 'thick and widespread' support and minimizing blind spots."

To maintain 240-thousand jobs at struggling businesses, the government will inject 250-billion won in support.

Ten-thousand university students whose parents have lost jobs will get two-point-five million won in scholarships over five months.

The government plans to submit the budget plan to the National Assembly on Thursday, and if the bill is approved in mid-March, the payments are expected to start before the end of this month.

But the main opposition People Power Party says the timing of the cash handouts is politically motivated ahead of the Seoul and Busan mayoral by-elections on April 7, and a thorough examination is necessary to approve the budget, which will impact the government's fiscal health.

In a policy speech before the National Assembly on Friday, Chung said the country’s finances will collapse if people’s livelihoods break down.

The prime minister likened the extra budget plan to a “livelihood treatment” that lessens the suffering of those devastated by the pandemic and to a “livelihood vaccine” that wards off deeper societal polarization.