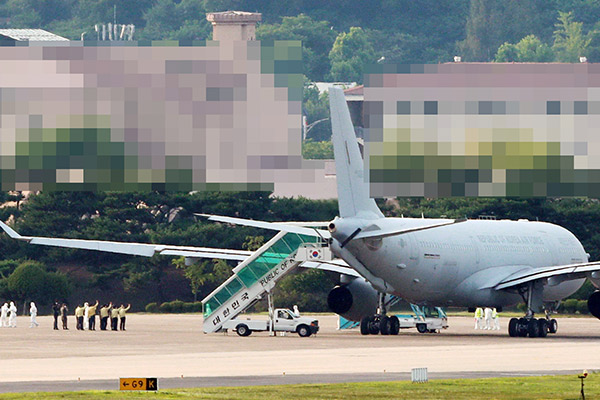 All 301 members of the anti-piracy Cheonghae unit struck by an extensive COVID-19 outbreak arrived in South Korea on Tuesday.

The Ministry of National Defense said a KC-330 Cygnus multi-role aerial tanker carrying 160 sailors of the destroyer Munmu the Great landed at Seoul Air Base in Seongnam, Gyeonggi Province, at around 5:30 p.m.

Two-hundred-forty-seven of the 301 members, or 82 percent of the Cheonghae unit's 34th contingent, had tested positive in the country's biggest cluster among service members.

The Defense Ministry said 14 of the sailors, including three with moderate symptoms, will be transferred to medical institutions. Those who test negative to a PCR test will be moved to a quarantine facility within the military.

On the same day, Defense Minister Suh Wook issued a public apology regarding the outbreak.

The minister said he takes heavy responsibility for failing to look after the safety of the Cheonghae unit sailors, as he apologized to them, their families and the general public.

Expressing regret at the ministry's failure to vaccinate the crew ahead of their dispatch in February, Suh pledged to inspect shortcomings in quarantine support for overseas service members and implement thorough measures accordingly.

The Defense Ministry on Thursday launched a probe into the outbreak onboard the destroyer.

According to the ministry's audit office, a ten-member team will conduct the inquiry until August 6, which will look into the Joint Chiefs of Staff, the Navy, the Armed Forces Medical Command and the Cheonghae Unit and their responses to the outbreak.

The inspection will focus on preparations before the unit's 34th contingent shipped out in February, the initial response to the outbreak and general onboard quarantine management.

The military has come under fire as none of the unit members had been vaccinated prior to their departure.

The team is also expected to review records and question crew members as part of its efforts to pinpoint how the virus first came onboard.

The ministry plans to take punitive action against those found responsible for failing to prevent the outbreak.