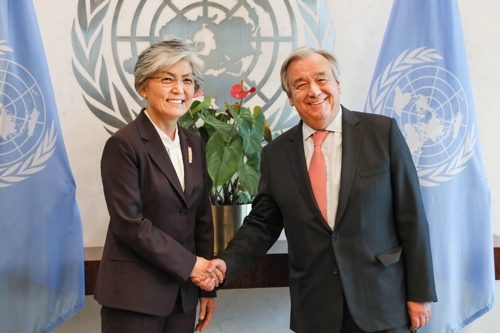 South Korea's top diplomat met with the chief of the United Nations in New York on Thursday to discuss international cooperation to promote negotiations for North Korea's denuclearization.

UN Secretary-General Antonio Guterres said the UN will continue to provide support so Seoul's peace efforts will bear fruit, noting that the U.S. and North Korea have expressed their willingness for talks.

After the meeting, Kang told reporters Seoul remains firm in its stance that the enforcement of sanctions against North Korea should continue until the North clearly denuclearizes.

Kang is scheduled to attend the UN Peacekeeping Ministerial on Friday and then head to Washington for talks with U.S. Secretary of State Mike Pompeo.
Share
Print
List