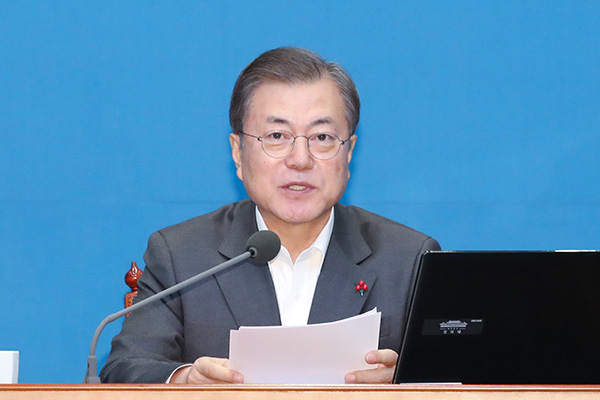 President Moon Jae-in said Monday that his government is now in the final stages of reaping results of institutionalizing reform of the prosecution, and that this has provided an opportunity to examine aspects of unfairness within Korean society.

Chairing a meeting of his top aides, Moon said there has been no small amount of conflict and confusion, but the public's ardent desire has served as the driving force to reform the prosecution and uplift the value of fairness.

The remarks come as a vote is expected in parliament on a bill to install a new investigative agency specifically to address corruption among senior public officials.

The weekly Monday meeting was the last of its kind for 2019. It was streamed via video link so that all presidential office employees could watch.

President Moon said that despite difficulties at home and abroad, this year has offered hope and he thanked the Korean people's hard work and dedication.

He said that he and his government will manage state affairs with a more humble attitude and also urged the National Assembly to rise above political wrangling and pass bills related to public livelihood and the economy.
Share
Print
List