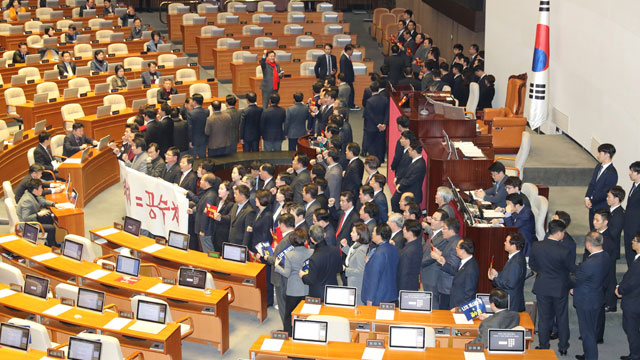 The main opposition Liberty Korea Party(LKP) lawmakers have been occupying the speaker’s seat at the National Assembly on Monday evening in their desperate bid to block the passage of a controversial bill that would create an independent anti-corruption investigative body.

Dozens of LKP lawmakers gathered around the speaker’s podium to keep Speaker Moon Hee-sang from taking the chair and proceeding with a planned vote on the fast-tracked prosecution reform bill by the coalition of the ruling Democratic Party and minor opposition parties. Some held up a banner that claims that the creation of the investigative body is to hide crimes by the Moon Jae-in administration.

Earlier in the day, the DP announced a plan to put the controversial bill to vote when the plenary session convenes at 6 p.m. Monday.

The LKP exercised a 27-hour filibuster in blocking the bill’s passage in the previous extraordinary parliamentary session last week and cannot repeat a filibuster for the same bill under the Assembly act.

Last week, the parties within the so-called "four-plus-one" framework -- the DP, three minor opposition parties and a splinter group -- finalized the bill. Under the bill, the agency will be tasked with investigating corruption allegations surrounding the president, lawmakers, the Supreme Court chief, the Constitutional Court chief, the prime minister, judges, prosecutors and other high-level officials.
Share
Print
List