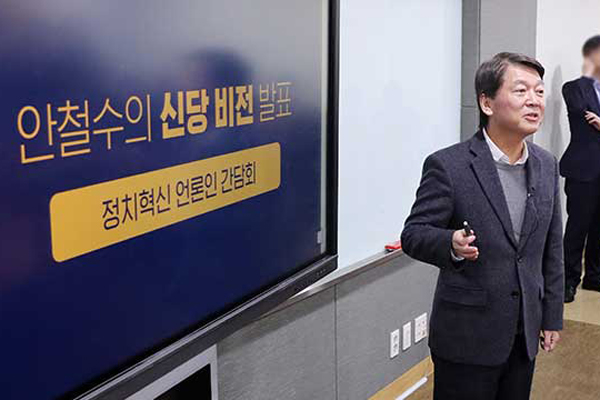 Former presidential candidate and co-founder of the minor opposition Bareunmirae Party(BP) Ahn Cheol-soo is moving to quickly create another party following his return from a 17-month hiatus from local politics.

The CEO-turned-politician on Monday named BP Rep. Lee Tae-kyu and law firm CEO Kim Kyung-hwan to spearhead a task force on the creation of the new party while appointing some of his aides as prospective regional representatives.

The so-called Ahn Cheol-soo Party is planning to hold an initiators’ meeting in mid-February with at least 200 participants before launching its regional and central party structures.

A website for the party is already up and running to recruit fresh talent and gather public proposals.

Ahn has been moving quickly since he left the BP last Wednesday, citing differences with the party’s current chairman Sohn Hak-kyu and his management style.

Around 20 BP lawmakers, including those holding proportional seats, earlier expressed their intent to defect and join Ahn unless Sohn stepped down.

Under National Assembly law, proportional representatives who voluntarily leave their parties lose their seats, however, if they are expelled, they can still keep their seats in parliament.

Ahn made his new party plan official at a press conference Sunday, during which he explained that he felt a deep sense of responsibility to stop the country from falling into a worse situation.

The 57-year-old vowed to overcome differences in ideologies and introduce innovation to reform politics.

Ahn, who garnered more than 20 percent of the votes for his third-place run in the 2017 presidential election, left South Korea following his loss in the 2018 Seoul mayoral race and had been staying in Germany and the United States.

Upon his return earlier this month, Ahn said he would not run in the upcoming general elections, but vowed to help other candidates and seek a “pragmatic and middle-of-the-road” approach to politics.
Share
Print
List