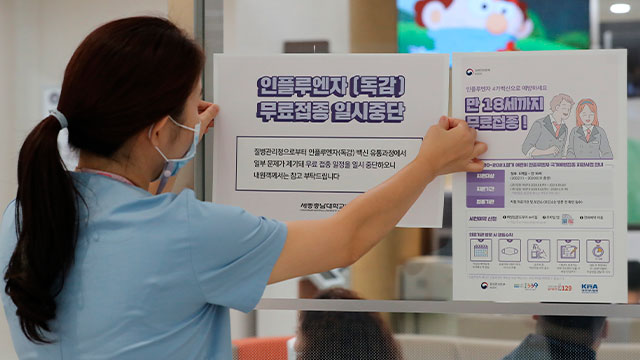 The South Korean government suspended its annual free influenza vaccinations for children, seniors and pregnant women, after it was found that the refrigeration temperature was not maintained while transporting the vaccines.

Korea Disease Control and Prevention Agency(KDCA) Commissioner Jeong Eun-kyeong said on Tuesday that some five million out of 12-point-59 million doses the government purchased this year have so far been distributed to medical facilities.

While some of those doses are reported to have been exposed to room temperature, Jeong stressed that the problem arose during distribution, and not during the manufacturing of the vaccines.

After a two-week safety inspection of the inoculations, authorities will decide whether to use them, but should they decide to discard them, they will have to revise the plan to prevent a "twindemic" of the influenza virus and COVID-19.

In a bid to prevent this occurrence, the government expanded eligibility for free flu shots to some 19 million people this year.
Share
Print
List