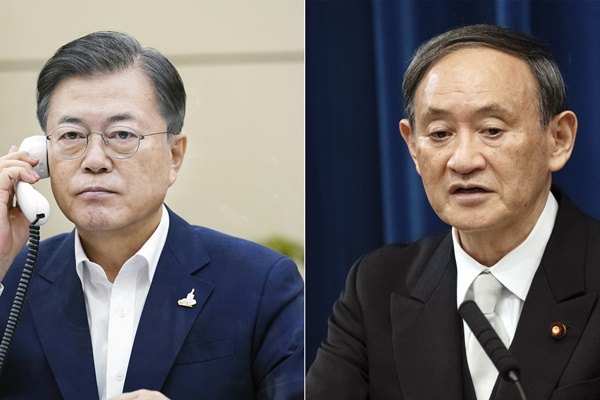 Presidential spokesperson Kang Min-seok said the president revealed his stance during a 20-minute phone conversation with Suga on Thursday.

Moon said that while it’s true Seoul and Tokyo are at odds over issues related to Japan’s wartime forced labor issue, he hopes to find the best solution that will be accepted by both governments and the individuals involved.

In congratulating Suga on becoming prime minister, Moon said South Korea and Japan are close friends who share basic values and strategic interests, as well as partners who must work together for peace and prosperity in Northeast Asia and the world as a whole.

Suga said though Seoul and Tokyo are facing difficulties due to various issues, including historical matters, he hopes to build bilateral ties in a future-oriented manner with Moon.

The two leaders also agreed to cooperate on efforts to combat COVID-19 during the phone discussions which were the first to be held since Suga took office.
Share
Print
List