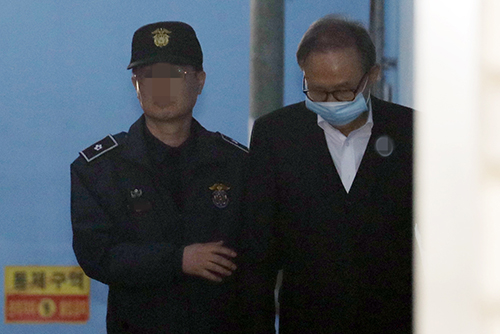 Ex-President Lee Myung-bak will begin serving his prison term next week after the top court upheld his sentence for embezzlement and bribery.

The Seoul Central District Prosecutors’ Office said on Thursday that the 78-year-old former president will be taken back into custody at Seoul Dongbu Detention Center and serve his term from Monday.

The prosecution issued a summons for Lee immediately after the Supreme Court upheld his 17-year imprisonment sentence.

However, Lee’s legal representatives requested a reprieve for medical treatment.

Under the law, the execution of a sentence can be postponed for up to three days.

He was kept at the detention center in Songpa District in Seoul after he was arrested in March 2018, was released a year later on bail and taken back into custody after an appeals court sentenced him to 17 years, two years more than the lower court ruling.

He was again released after his lawyers appealed the decision and called for a stay of execution.
Share
Print
List