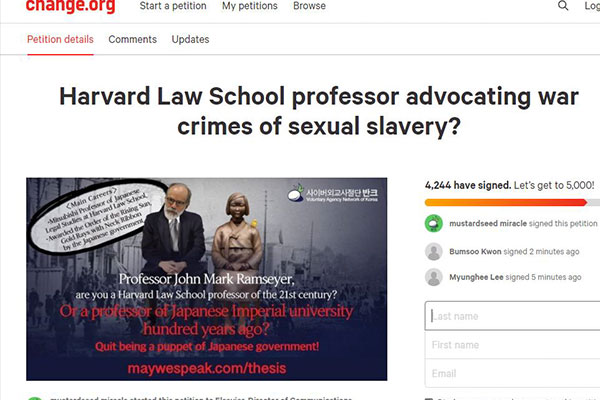 The Voluntary Agency Network of Korea(VANK) says the president of Harvard University found no issue with a paper by Harvard professor John Mark Ramseyer that claims Japan's wartime sex slaves were willing prostitutes.

According to the South Korean civic group Wednesday, Harvard President Lawrence Bacow said in a response to the group that there is no problem with Ramseyer’s paper as it falls under academic freedom, adding that Ramseyer’s claims are personal views.

In an email sent to Bacow, VANK had urged the university to seek disciplinary action against Ramseyer and to not have his paper published.

In response to Bacow, VANK sent another letter, reiterating its protest. The group attached a list of some ten-thousand-600 people from 96 countries that signed a campaign on the petition website Change-dot-org. The petition calls on the International Review of Law and Economics to withdraw Ramseyer's thesis.

The journal is set to publish Ramseyer’s paper titled “Contracting for sex in the Pacific War” next month. In this paper, Ramseyer describes comfort women as prostitutes who worked on a contractual basis and could negotiate for wages.
Share
Print
List