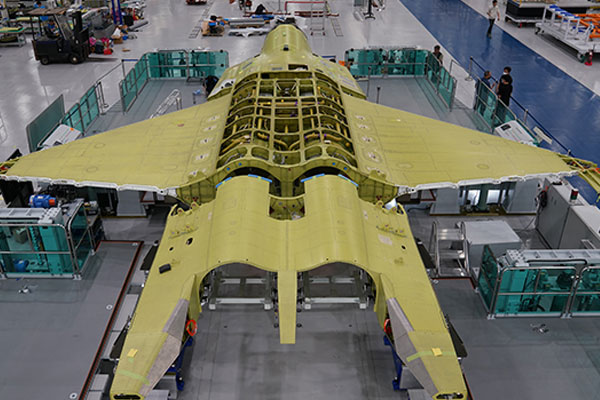 Speaking at an unveiling ceremony at the Korea Aerospace Industries in South Gyeongsang Province on Friday, Moon said the country has opened a new era of self-defense amid the historic milestone in the advancement of the aviation sector.

He said the combat jet will go into full-fledged production after ground and flight tests are completed, with a plan to deploy 40 units by 2028 and a total of 120 by 2032.

Moon then named the supersonic KF-21 fighter "Boramae," which means a young hawk, or the symbol of the South Korean Air Force.

The KF-21 Boramae can travel one-point-eight times faster than the speed of sound and neutralize penetrating forces on the ground and sea.

Moon noted there are several merits to owning a domestically developed combat plane, adding the success not only contributes to national defense but also brings huge economic benefits.

He said that once mass production begins, 100-thousand jobs will be created with an added value of nearly six trillion won and even more if exports are realized.

The president went on to name 20 individuals who played a key role in the fighter jet's development and also thanked Indonesia for its partnership in the project.
Share
Print
List