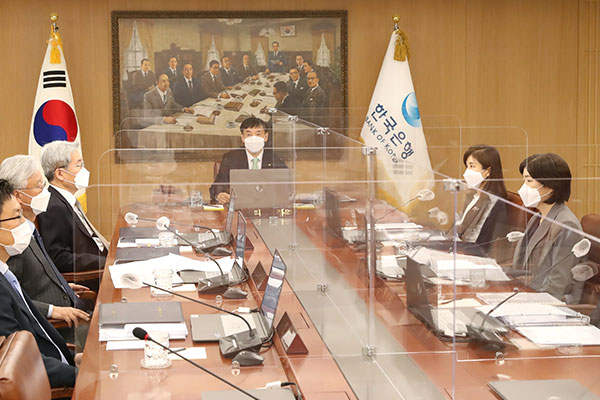 The Bank of Korea(BOK) kept its key interest rate at a record low of point-five percent on Thursday amid a prolonged wave of the COVID-19 pandemic.

It is the seventh consecutive session that the central bank's monetary policy board kept the key rate frozen.

​In a statement, the board said it will maintain its accommodative policy stance.

It said that although the nation's economy will steadily recover, policymakers remain uncertain how the pandemic will unfold while inflationary pressure on consumer demand is likely to remain modest.

In a press conference following the board meeting, BOK Governor Lee Ju-yeol said he expects the South Korean economy to grow in the mid-three-percent range this year considering the trend in the first quarter.

This is higher than the bank's projection of three percent in February. Lee cited an improving global economy, a recovery in exports and consumer sentiment as well as an expected boost from the government's supplementary budget.

The bank slashed base rates twice last year amid projections that the global pandemic will adversely impact the economy.